It’s been a very busy few months for Timehop.

The app, which provides users with a personal “today in history” memo by surfacing their photos and social networking posts from this day one year ago or more, is closing out the year with more than 12 million registered users, half of whom, some 6 million, open the app every single day. That’s double the number of both registered and daily active users that Timehop had just five months ago, when we last checked in with the company in July.

To help advise with the growth, the company has added Jason Goldman to its board of directors. Goldman, a longtime Timehop user who has been an informal advisor to the startup’s executive team for a year, has become known in tech circles as something of a quiet secret weapon for his 12+ years of work alongside the more widely-known Evan Williams and Biz Stone as an executive and board member at Blogger, Google, Twitter, and Medium. Goldman’s experience with such products will likely come in handy as Timehop navigates rapid growth in its user base. 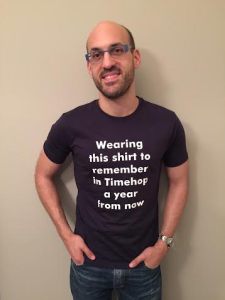 Taking off with the mainstream

In an interview earlier this month, I told Timehop’s CEO Jonathan Wegener that anecdotally, I’ve started to notice a surge in Timehop posts on Facebook from family members and old school friends — people well beyond the Silicon Valley and startup scene. According to him, Timehop’s growth spurt indeed comes from the app hitting an “inflection point” of wider appeal.

“People who are super early adopters have been on Facebook since 2004 and Twitter since 2006. More mainstream people were a few years behind. Their experience on Timehop was not going to be really good until now,” Wegener said.

Timehop began in February 2011 at a Foursquare hackathon as an app called “4SquareAnd7YearsAgo.” It caught on right away with some prominent social web early adopters, but Wegener says that at the time, 60 to 70 percent of users who tried out the app didn’t have enough of a history for it to work correctly.

“Three years later, everything’s just ripening,” he said. “When we started, remember, Instagram had barely even launched yet. We’re just now getting to the point where people have years and years of digital histories. That’s always been our bet: Your digital history is growing exponentially.”

But all that exponential growth needs the support of especially solid infrastructure. Timehop’s staff of 18 has been focused in recent months on reinforcing its architecture to handle the growth and keep its latency down. The company has moved off of Heroku and onto Amazon’s Dynamo DB, and has rewritten its codebase in the Go programming language.

Those changes have been key, because Timehop has unique technical challenges compared to many other social-oriented apps, Wegener said. “When someone signs up for an app like Facebook, they typically have no storage needs and no data, and their requirements grow with time. On day one when someone signs up with Timehop, we have a small window of about 10 seconds to grab everything off of their social networks and shoulder all of that content.”

Looking ahead, Wegener says that Timehop has begun to think about how it will make money — a company like Coca-Cola could pay for a feature on the anniversary of its being founded, for instance — but for now, he says that revenue generation is likely a number of months away.

In the near-term, Timehop is hoping to build itself into a platform where users can write their digital histories across all types of services: Think flight histories, Uber rides, Runkeeper runs, and beyond. “The social networks are the low-hanging fruit for us. Your digital history is much wider than just the things that you post to Facebook and the photos on your camera.”