Though many developers have begun to abandon Google Glass, a Cambridge, Massachusetts-based startup called Brain Power believes that the hardware still has plenty of possibilities for children with autism. Brain Power develops Google Glass apps, as well as hardware add-ons, that help kids learn social and communication skills while at the same time providing feedback to caregivers.

Brain Power was founded by neuroscientist Ned T. Sahin (pictured above with a shipment of Google Glass), who did his graduate training at Harvard Medical School and MIT. The company’s goal is to help people in their daily lives by “bring[ing] together the emerging wearable-computer revolution with the explosion in discoveries in academic neuroscience,” he said in an email.

Sahin became interested in using Google Glass to help children with autism after attending a symposium at MIT on the neurodevelopmental disorder while wearing the device.

“I was absolutely astonished at how much remains undiscovered about the hows and whys of autism, from a neuroscience point of view, and even more importantly I was shocked and even shamed to learn that parents have to wait so long to get information about their children’s condition, and then have so little in the way of effective training strategies or treatments, or numerical reports on their children’s progress,” said Sahin.

Since the autism disorder spectrum is so wide, Brain Power has focused its initial development on children with moderate to high-functioning autism, though it hopes to extend its apps’ capabilities to other kids as well. So far, 200 people have signed up for Brain Power’s beta program, which will be conducted in three stages next year, and include research conducted under the protocols of Harvard Medical School by Brain Power’s team members.

Sahin believes Google Glass is ideal for helping kids with autism because it has an accelerometer chip that enables head gestures, which Brain Power uses to track when kids look or don’t look at their parents, as well as stereotypy, or the repetitive movements that many people with autism make.

“In this way, we can provide numerical, objective, repeatable assessment of a child’s current behaviors, as well as progress over time,” Sahin said.

Brain Power’s Google Glass apps, called the Empowered Brain Suite for Autism, encourages kids to interact with their parents and make eye contact by presenting exercises like a game. While there are mobile and PC apps designed to help children learn social skills, Sahin said Google Glass has an advantage because “it keeps children with autism connected to their families, and the real world.”

“While the many successful iPad and computer-based solutions demonstrate that children with autism are perfectly able and happy to interface with technology, an iPad is a double-edged sword,” he added.

“Many families find their children glued to the screen, looking down and away from the world, potentially further isolated. Glass allows them to look up and into the world, and our applications give them coaching and rewards for making eye contact and engaging socially.” 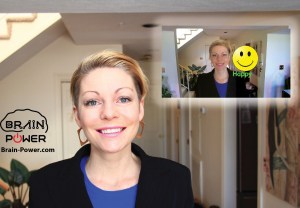 Brain Power’s apps have “social engagement module monitors” that assess how a child engaged with his or her parents, specifically if they are looking at their parents’ face and eyes, Sahin said. Then Brain Power’s software helps kids interpret their family members’ expressions through a series of games and exercises, with the ultimate goal of helping them figure out facial emotions even when they aren’t wearing Google Glass.

“It has often surprised parents how quickly their children have adapted to using Google Glass,” Sahin said. “Even children who have sensory overload issues, something commonly encountered in autism, have found they can tolerate wearing Google Glass—indeed are often excited to do so.”

Other areas the Empowered Brain suite will tackle include language. When a child looks at something through Google Glass, the object is identified through the device’s machine vision, and its name is displayed and spoken through the Glass’s speaker or earbud. Children will eventually be able to receive personalized language and conversation coaching through the app. Brain Power’s software will also use Google Glass’ accelerometer to predict if kids are about to have a tantrum and give caregivers and children suggestions on how to calm down.

Of course, software developed for Google Glass can only benefit kids if they get access to the hardware, which is currently priced at $1,500. Sahin says Brain Power has “worked closely with the Massachusetts Institute of Technology Sloan School of Management to build unique business models” that will help more families who want to use the startup’s apps afford Google Glass. These include a monthly payment schedule. Sahin also hopes that the final price of Google Glass when it launches to consumers next year will be lower than its current cost.

As for the apps, Sahin says they will be made available on a subscription-basis: “We are committed to a pricing system that can reach every family or school with a need; and we believe that monthly subscriptions with several tiers will help us achieve this, and will also help keep the software fresh and feature-rich.”