Rumr Inc, a mobile messaging focused startup which last year raised an $800,000 seed, led by Khosla Ventures‘ Ben Ling, to fund a series of projects, has now launched its third app — called Stichy — this one focused on sharing multimedia content within groups.

Rumr’s founder is James Jerlecki, who brings a background in messaging to the business, having previously worked for textPlus. Jerlecki kicked off Rumr Inc with an eponymous, anonymish group messaging app rumr, launched in March this year. The team followed that with the Slingshot-esque Shotclock, launched in August, which turned photo sharing into a popularity contest via gamified ephemeral antics.

Their third effort, Stichy, feels as if it has a little less zeitgeisty buzz and a little more substance to it than either of its predecessors, given it’s addressing what is — at least relatively speaking — a bit of a pain-point: sharing photos of the same event, such as a Birthday party, taken by different people at the event. Albeit it’s competing with Facebook on the group social photo sharing front, but with a tighter frame — allowing for easier sharing within smaller groups.

“Collaborating on mobile sucks,” writes Jerlecki in a Medium post announcing the launch of Stichy. “I was at a friend’s birthday a few weeks ago and at the end of the night, the fifteen of us spent 20 minutes seeing who had halfway decent photos and figuring out how to send the photos to each other just so we could look at them. What’s your phone number? Email them to me. Airdrop works better — it was a mess!” 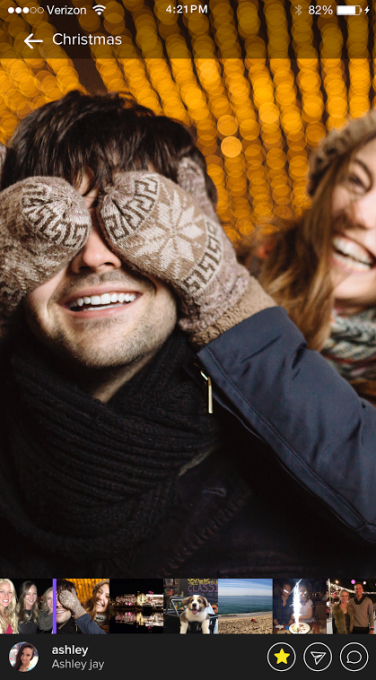 Everyone who has been added to a particular Stichy can add stuff to the Stichy, and also comment, like, share and so on. Content within a Stichy is ‘played’ (i.e. displayed) in the order it was added, much like a slideshow. Or users can swipe through manually at a faster speed. A Stichy can be left open-ended for more content to keep being added, or closed off by its creator — which means no more new content can be added, but any existing content remains viewable and downloadable.

To ease media sharing outside the app, collaborators can save all of the media within a Stichy, regardless of whether they took it themselves, so the pooled content does not remain locked up within the Stichy app’s Amazon Web Services’ based cloud storage locker. But presumably Stichy’s willing participants are waiving any copyright claims on their own content, given it’s shared by default with any others that are added to that same Stichy.

Even though the primary use-case for Stichy is simplifying group sharing of media between friends and family, Jerlecki points out the app could also be used by individuals wanting to create a visual record of a particular activity or thing, such as tracking their gym progress, week by week. Or recording a seasonal view of their garden.

Asked how Rumr’s other apps are going, Jerlecki says more than 100,000 photos have been sent via Shotclock since the app launched in August, with total views exceeding one million so far. So it’s evident that Rumr’s earlier apps have not been viral smash-hits yet. The team will be hoping it’s onto something a bit more immediately sticky with Stichy.

As well as Khosla’s Ling, Google Ventures‘ MG Siegler, who — disclosure alert — has been a columnist for TechCrunch (but had no input into this article), also participated in Rumr’s October 2013 funding round, along with Greycroft Partners, LA-based angel investor Paige Craig, and Scott Lahman, textPlus founder and CEO.

Stichy is available as a free download on Android and iOS. It remains to be seen how Rumr could monetize usage, but perhaps — if it can build a solid Stichy community — there could be scope to monetize around paid cloud storage for higher resolution content.

“While we do plan to keep the service free, being able to store and share things at even higher resolutions when it comes to pictures and videos is top of mind,” Jerlecki tells TechCrunch, when I ask about future revenue streams.

“I definitely would not rule out charging or partnering with a cloud storage service for something like that if we see users starting to have large amounts of data saved on Stichy, but again important to see how the community evolves and uses Stichy,” he adds.

“Right now our focus is on making it easy for people to collaborate on mobile. There’s not a whole lot out there that is really simple or fun to use. We’ve seen the tool used both ways by creating threads like silly selfies and memes or like how I used it with my family on Thanksgiving to capture and create a story of a meaningful time in my life.”