Sony’s new Android Wear-powered SmartWatch 3 bucks a trend of the company releasing devices that use their own wearable platform, opting instead to jump on the bandwagon that includes a host of other Android wearable OEMs. It ends up being a big benefit, when you compare this device against previous SmartWatch models, which have proven overwhelmingly uninspiring.

Sony’s design on the SmartWatch 3 might be described as “minimal” or “classic” by some, but to me it’s just boring. The look of the device reminds me of what you might find in a reference document made available to Android Wear OEMs – the generic and prototypical Android Wear hardware that is intended as a placeholder, rather than an actual shipping gadget.

This is even more disappointing because the SmartWatch 3 arrives at a time when it seems like other OEMs were just getting it, so to speak, in terms of realizing that the key to distinguishing oneself in a market where the software is essentially cookie cutter is by providing a unique angle on design. Sony’s watch feels like it has much more in common with the rushed offerings available at Android Wear’s launch than with more mature watches like the G Watch R or Asus ZenWatch.

While uninspired, the SmartWatch 3’s design does provide some benefits; the silicon band is durable and comfortable, plus it can be worn during all kinds of activity. Sony’s decision to make the watch unit itself swappable, rather than using a standard band, has advantages if it comes up with a line of different types of cases to house it, but feels limiting at launch with only color options to choose from.

One other thing that Sony has done right with this – they’ve made it so that it charges via standard micro USB, via a port on the back. It’s so much better than the proprietary chargers every single other device maker seems to be opting for that it almost makes up for the overall ‘meh’ look of the watch. Almost.

I’ve said this so many times now I feel like a broken record, but Android Wear devices are mostly of a piece when it comes to feature sets. They all offer notifications from your connected Android smartphone, they all allow for voice commands, and dictated response to messages in apps that support those features. They all track your steps, too.

Other things they don’t all do include tracking your heart rate, and the Sony SmartWatch lacks the sensors necessary for those features. This is not, in fact, a major strike against it: heart rate tracking on these devices is of limited value at best, since they can only take your pulse after you stay very still for a few minutes, and then you only get a snapshot of a moment in time. If you’re an athlete doing heart rate-based zone training, this is worthless, and if you’re just an average person, it’s mildly interesting for the more curious, but mostly useless for just about everyone else.

As for what Sony does include, the SmartWatch 3 is the first Android Wear device with onboard GPS. That GPS comes in handy now that Google has added support to Android Wear as a platform for its powers, and this makes it much better for using when you’re out for a run without your phone attached. The app works with Googles’ own MyTracks, and combined with offline Bluetooth and song storage, it can replace a lot of basic fitness trackers and works as a competent smartwatch when connected back up at home.

The SmartWatch 3 also has a hidden payload: It supports Wi-Fi connections directly on the watch, but that’s not a feature supported by Android Wear yet, so for now it remains a tantalizing, albeit toothless aspect of the device’s overall design.

Sony’s SmartWatch 3 performs well as a dedicated fitness device, but in that capacity it competes with gadgets like the TomTom Cardio and Garmin’s devices. Many of those have continuous heart rate monitoring, which is even more appealing for hardcore fitness enthusiasts, in addition to GPS and fitness coaching support.

That said, the SmartWatch, in keeping with its rudimentary but effective design, offers a steadfast Android Wear experience overall, ticking the boxes without really excelling in any particular area. Its battery life is around a day with always-on screen, under the life leader LG G Watch R but on par with most other Android smartwatches out there. 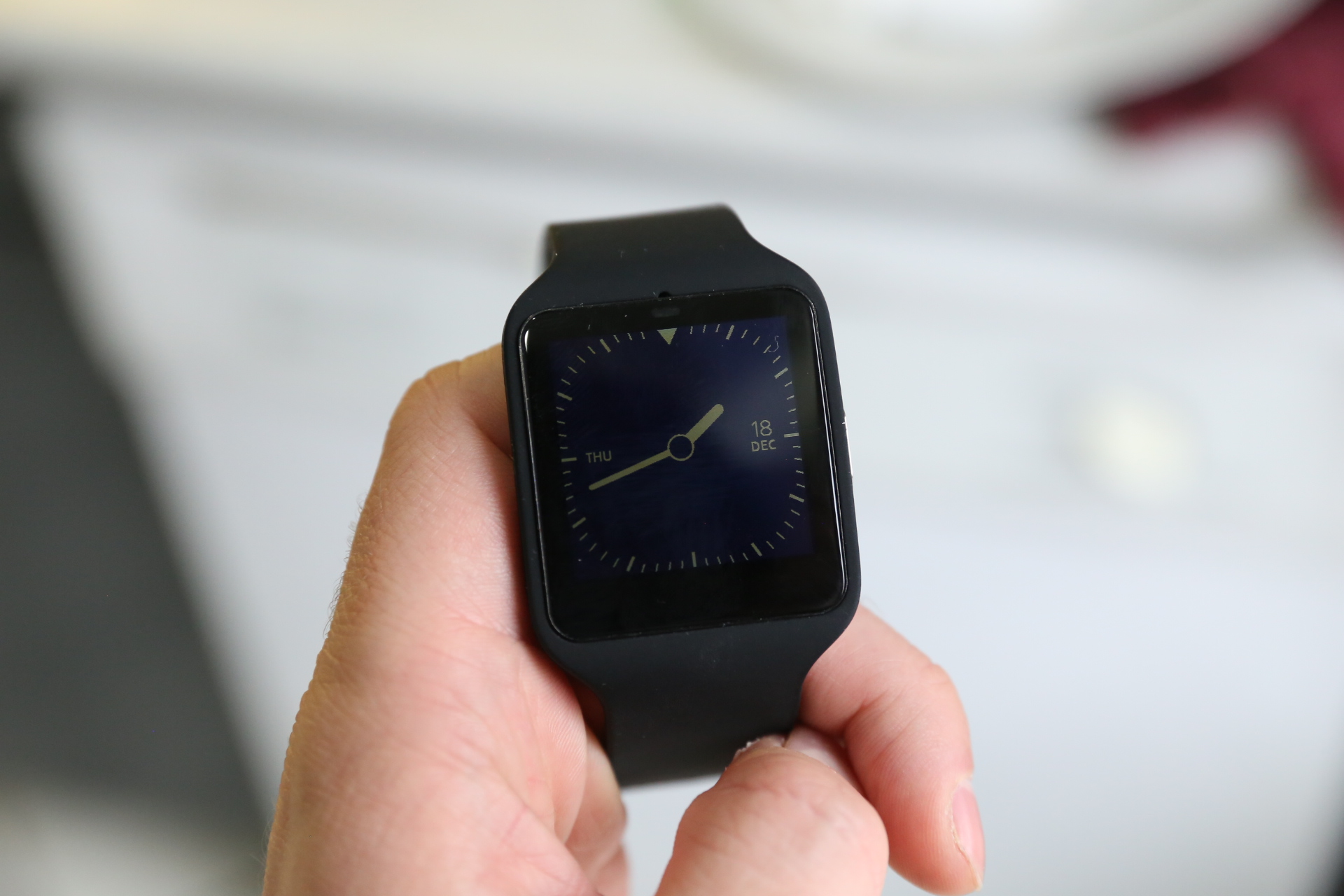 The display is weaker than most on the SmartWatch 3, however, perhaps owing to the transflective tech used to make the LCD easier to read both in bright light and darker situations. It succeeds when the screen is in its passive mode, but it does not look good when the LCD is actually active, and as a result the benefits that come with using transflective tech are mostly missed.

Sony’s SmartWatch 3 is one of the latest in Android Wear devices, but it has some failings I’d expect from much earlier entrants. The painfully neutral design feels as though it won’t be able to win over anyone with looks alone, and the lacklustre display really pales when measured against others on the market. The device’s saving grace is its use of onboard GPS, as well as that future gift of local Wi-Fi, both of which make the SmartWatch 3 the best Android Wear device for those looking to take advantages of updates to the platform and third-party apps as they come in. That means making some bets on the future, however, and it’s impossible to say that better hardware won’t be available from others by the time that happens.