As we previously reported at the time of Stayful’s seed round (the company raised $2.4 million led by Canaan Partners), Stayful’s co-founder and CEO Cheryl Rosner previously served as president of Expedia Corporate Travel and Hotels.com, while co-founder Shariq Minhas led engineering at Jigsaw, and worked for travel sites including Expedia and Hotwire, giving the team deep expertise in the travel and hotel booking market.

Stayful’s big idea is to allow users to negotiate for better prices on unsold inventory, by offering a platform that shows available rooms and suggested bids. The service works with a variety of independent hotels to find empty spots and then algorithmically determines what a fair price would be for the room. But consumers don’t have to go with that price – they can choose to offer the hotel their own lowball bid if they choose, and find out immediately if their offer is accepted. This makes the service comparable, to some extent, to something like Priceline, which lets you name your own prices for flights, hotels, and more . 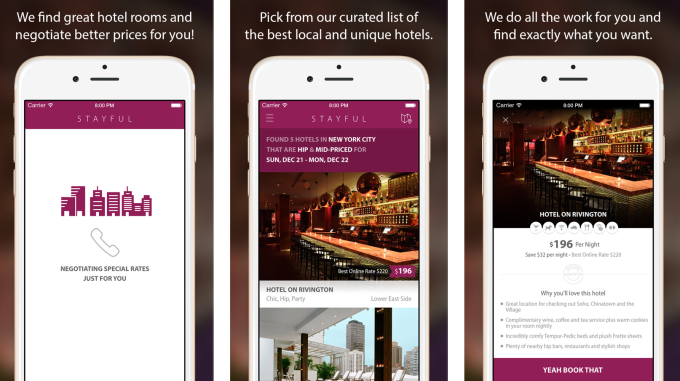 Because Stayful’s focus is on filling unsold inventory, it only books stays that are set to occur in the next 30 days – though, obviously, the closer it is to your stay, the more likely it is that a hotel would take your lower-than-suggested offer.

In addition, for travelers who prefer to stay in boutique hotels, Stayful is also useful for helping them find the right ones by describing them by themes – like hip, classic, kid-friendly, etc., plus offering descriptions and photos of the venue.

The new application offers the same feature set that was previously found online, but in a more convenient format for last-minute bookings. Users tell the app where they’re going, when, what kind of price range they’re looking for, and what type of hotel they want, and Stayful returns a curated list of suggestions. When you’re ready to book, the app is integrated with Apple Pay to make checkout easier. (Other payment options are also available, however.)

Stayful reports that its users save an average of 32% on their reservations. We’ve also asked the execs if they’d share metrics relating to the service’s traction with customers since its launch on the web last year, and will update with their responses shortly.

The new app is live on iTunes here.