Bitcoin spiked to north of $1,000 in late 2013, before starting a long decline in the current year. After some optimistic fluctuation, it has landed in a mid-$300 trading range that the virtual currency can’t seem to shake.

Gone, for now it seems, are the go-go days of bitcoin heading straight north.

All in our heads

We were but babes in the bitcoin woods at the turn of the last decade. Not much was known, and wild speculation in the cyrptocurrency helped develop its very own folklore.

Stories abounded of overnight bitcoin millionaires. Prices shot up, and many bemoaned that they did not invest when bitcoin was a mere $13 back at the end of 2012. The Winklevoss twins, owners of an exchange-traded fund in bitcoin, predicted that the price of bitcoin could one day rise to $40,000, a price that would represent a towering $400 billion USD market cap.

WordPress began accepting the currency in late 2012. Dell, Overstock.com and others joined in support, albeit through partner services. Startups and accelerators began to focus solely on the bitcoin ecosystem. One man and his new wife pledged to live on bitcoin for the first three months of their marriage.

It felt like all bitcoin, all the time. Pony up, or lose big. It didn’t quite last. 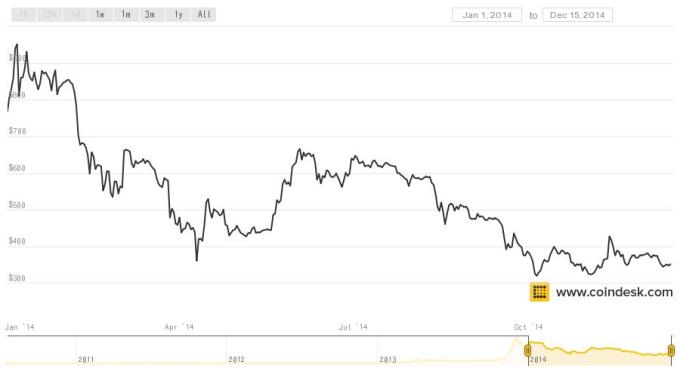 The way we live now

Investors now seem unsure of what to do with bitcoin. There is general consensus that individual bitcoins have value, but also that there isn’t much short-term potential for a large influx of new users. That directly implies that there won’t be massive, near-term, buy-side pressure on the currency.

Overall creation of bitcoin wallets is up, which is an indication of continued interest from potential buyers. Wallets are files that contain private keys used to unlock the bitcoins within the tool so that you can spend them. It’s akin to a physical wallet that holds credit cards.

The number of wallets in existence at the end of the third quarter grew to 6.5 million from 1.3 million a year earlier. But according to figures obtained by Reuters, most of those wallets are empty. It’s estimated that only 250,000 to 500,000 wallets actually contain bitcoins. That implies that many people are opening a wallet, but failing to actually buy any of the stuff; the process is losing its complexity as consumer-friendly tools spring up, but remains harder than picking up normal cash.

In addition, investors and the media are noticing that bitcoin was among the absolute worst investments this year, measured on a percentage-loss basis. That fact won’t deter true bitcoin believers. However, it’s worth noting the increasing chatter among the bitcoin classes that the underlying technology of the currency — the blockchain — is what matters, and not the price.

Of course, to be the value-transfer instrument that many hope bitcoin will become, some pricing mechanism will be required, keeping the price itself relevant.

“I think as an asset it is still the best performing over two years,” says Adam Draper, founder of bitcoin accelerator Boost VC. “We are in repair mode, where there is less speculative investment going into bitcoin, and people are finding real use cases,” he added.

Draper is the son of venture capitalist Tim Draper. Draper the elder, like his son, is one of bitcoin’s most faithful supporters.

For bitcoin, a rising price lifts all boats. Regardless of what part of the bitcoin ecosystem you think most important, having more general interest cannot be viewed as a negative. And thus if we do not see growth in bitcoin’s price in 2015, we could see more constrained growth in its use.

Microsoft recently made waves by starting to accept the stuff, leaning on a partnership with Bitpay. The fact that the second-largest company by market cap in the world has decided to allow bitcoin into its world failed to have an impact on the price of the cryptocurrency. As such, the addition of more firms accepting bitcoin should not, it seems, have material impact on its price.

The once and future crypto

If you want to imagine a higher price in 2015, you have to ask yourself what event, or series of events, will have your desired impact.

Adam Draper believes that impact will be in the launch of products, particularly to do with the blockchain, that will make the cryptocurrency more accessible. “I am still crazy bullish on bitcoin and the next six months is going to be exciting,” he told TechCrunch.

Draper’s accelerator invests in 20-30 companies twice a year. Boost recently switched to 100 percent pure bitcoin startups. The plan is to accelerate 100 bitcoin-centric founders by 2017. “The talented entrepreneurs entering the space are all going to be launching great products that will truly add value to the world,” Draper said.

Bitcoin is trading near year lows, erasing most of the value it previously created. Draper and other bitcoin believers are still hanging tough, but as far as bubbles go, this year’s implosion has been spectacular.

We are still left with much confusion, speculation and lore around this virtual currency. To the moon, indeed.