John Backus Contributor
John Backus is a co-founder and managing partner at NAV.VC and sits on the Board of Directors of the NVCA. Follow him on Twitter @jcbackus.
Hemant Bhardwaj Contributor
Hemant Bhardwaj served as a summer associate at NAV.VC and is completing his MBA at the Johnson Graduate School of Management at Cornell University. Follow him on Twitter @hemantmb

Update: After publication, several VC firms shared specific information about their percentage ownership at exit, which was higher than we assumed. As a result we added  dragon exits for Greylock, Sequoia and Kleiner Perkins.

Everywhere I look I see a unicorn.

Cowboy Ventures founder Aileen Lee wrote a brilliant, data-rich story here on TechCrunch one year ago called “Welcome to the Unicorn Club.” She introduced us all to the venture-backed unicorn – “U.S.-based software companies valued at over $1 billion by public or private market investors.”

So provocative was her analysis that today, all we seem to discuss or analyze in the venture world is the unicorn.

Apparently it takes a village to raise a unicorn, since more than 15 venture firms and investment groups claim credit for nurturing and raising Facebook, Twitter, the Active Network and Cameron Health.

Meanwhile, Chegg, Tumblr, Kayak, Yammer, Nest Labs, A10 Investors and Pandora all have a gaggle of investors who proudly showcase these unicorns in their portfolios, suggesting their unique investing aptitude. On average, each unicorn company was “claimed” by seven different investors.

The trouble is, I’m starting to see the dark side of the unicorn: Venture capitalists and the limited partners who back them are simply on a quest to acquire unicorn logos.

And it could kill their returns.

As an entrepreneur raising venture capital, it’s critical to understand why your VC is interested in investing in your company, so you can find investors with your best interest in mind.

A few weeks ago, I spoke to a long-time friend who is an LP at a top fund of funds. He was proud to report that their fund was in 40 percent of the unicorn exits of the past three years. I congratulated him and asked him how those funds performed.

The silence was telling. And herein lies the problem: All unicorn investments do not create unicorn outcomes for LPs. It isn’t even close.

We should spend more energy celebrating the success of the entrepreneurs who create unicorns. After all, they’re the rock stars creating the billion-dollar companies. We VCs are in many ways just along for the wild ride. We should also examine the motive and financial results of investors who claim to be among the best unicorn hunters.

Which venture capital funds back unicorns but fall short on returns? We could all venture to guess, but here’s a wrong way to do the math: If a VC invests $10M – $25M from a huge VC fund into an already successful company at a multi-billion dollar valuation to acquire less than .5% of the company, what’s the point – besides the right to display a unicorn logo for its website?

In golf they have a great saying – “Drive for show, putt for dough.” I would like to suggest that for many if not most VCs and LPs, investing in unicorns, especially at the late stage, is like “driving for show” in golf. But if that is the case, how do you “putt for dough” in the VC world?

Very simple. Look beyond the unicorn and find the dragon. Unicorns are for show. Dragons are for dough.

Looking Beyond the Unicorn

And while dragons are much more valuable than unicorns, they are increasingly hard to find as the size of your venture fund grows. Simple math.

You cannot “buy your way” into a dragon late in its life because at that point the remaining upside is unlikely to return your entire fund. You have to find dragons when they are young, but you can buy into a unicorn at any time.

And it is not an easy task to determine which unicorns are dragons for their VCs and LPs. Investors do not want to share this with you. The investors want you to just stop and see the pretty unicorn logo.

In an effort to quantify our reasoning, we assembled a dataset of the $1 billion+ exits (excluding companies still private) from January 1, 2004, to June 30, 2014, to determine how many dragons there were within that pool.

Out of 62 unicorns, only 17 of them were also dragons for their VCs. Roughly just one-fourth returned an entire fund for any of their VC investors.

And out of these 74 different VC unicorn hunters, which invested in unicorns, only 21 of their 339 unicorn investments delivered a dragon to their investors. So to put a fine point on it: One out of four unicorns include an investor for which their investment returned their fund – a dragon. And out of 339 VC investments in unicorns over the last 10 years, only 21, around 7 percent, returned an entire fund. 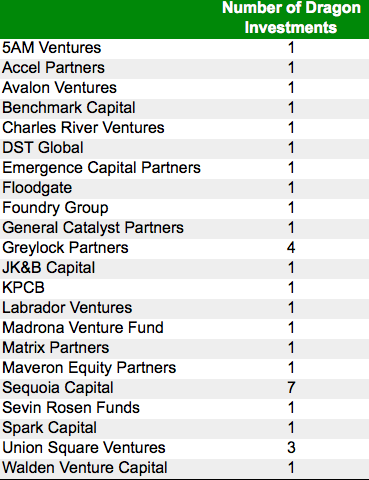 The 21 firms that can rightly claim that their unicorns were also dragons for their LPs include Sequoia Capital, Greylock Partners, Spark Capital, Floodgate, Matrix Partners, Charles River, Union Square Ventures, Accel Partners, Benchmark Capital and a dozen others.

All things being equal, I would rather back a dragon than a unicorn.

Editor’s Note: John Backus is a co-founder and managing partner at NAV.VC and sits on the board of directors of the NVCA. Hemant Bhardwaj served as a summer associate at NAV.VC and is completing his MBA at the Johnson Graduate School of Management at Cornell University.

(1) Data comes from both public sources and research databases, including Crunchbase, Capital IQ and Preqin.

(4) All of non-unicorn exits from venture backed companies that were dragons for their often smaller VC funds were excluded.