Shove over Tinder. Swiss startup Blinq has come up with a new twist on the dating app. The startup is incorporating beacon proximity technology into the mix so singles can do more meeting IRL and less swiping — thanks to select venues being kitted out with Blinq’s Estimote iBeacons. These work with an in app feature called InstaConnect which lets users opt in to be notified if any of their dating matches or singles that fit their criteria happen to be hanging out at the same location.

Thus far Blinq has mostly rolled out the Bluetooth iBeacons in Zurich, as part of its pilot, and is still very much in a learning phase with the proximity technology. The beacon feature launched in September in Blinq’s iOS app (it does have an Android app too) and around 50 beacons have been installed so far, including at the Swiss ski resort of Arosa. The team says it’s in discussions with brands and venues about expanding this footprint.

There are obvious synergies between dating apps and nightlife venues. Indeed, Blinq sees part of its business model as a b2b service selling the ability for venues to encourage Blinq users who are nearby to come inside and have a drink or two on the house by pushing out relevant offers, sweetened with the knowledge that one (or more) of their prior matches happens to be inside.

“We are in active talks with major beverage brands to scale our beacon network to other cities outside of Switzerland. By using the brands existing sales channels we can equip venues very efficient with our beacons. For these brands our case is interesting: we are able to engage consumers with a brand in a relevant context. Furthermore, we are able to drive traffic to their accounts,” says co-founder Jan Berchtold.

Leveraging nightlife brand synergies is absolutely on Blinq’s expansion roadmap. But it’s early days for the beacon side of the business — given how new the Bluetooth proximity tech still is, and how limited its own venue rollouts are so far.

Still, Berchtold is confident beacon tech, augmented with other smartphone sensor signals such as GPS and motion data, offers huge potential to improve dating apps. He argues sensor tech will enable mobile dating to get much smarter and more contextual while also simultaneously being more passive, since users aren’t having to constantly scan their phones to be informed about potential matches in the vicinity. 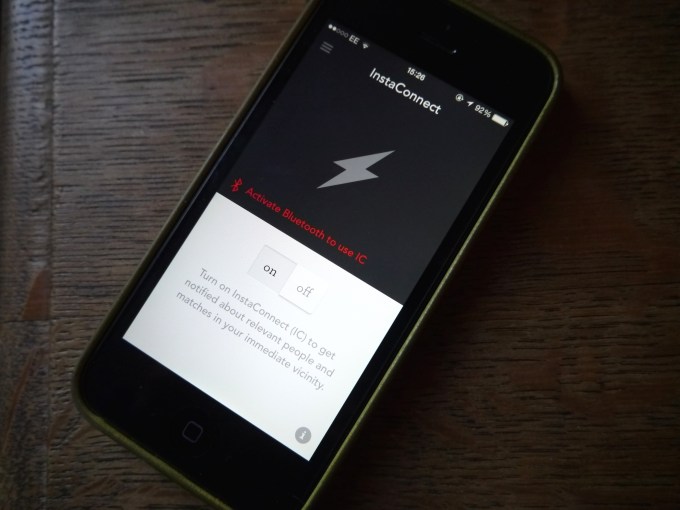 “We see great potential in increasing the chances of a meet-up by passively connecting people in the right context on behalf of our InstaConnect feature. At the moment, we make use of the highly accurate beacon technology to notify matches if they are at the same bar or club. But this is only the first step into the future of contextual mobile dating. In a next step, a combination of motion, GPS and beacon location data is used to bring people together at festivals, colleges, malls, gyms and many more places,” he tells TechCrunch.

“As an example, we equipped chairlifts and après-ski bars in the ski area Arosa in Switzerland with beacons. If you and one of your matches are detected to be skiing in Arosa on the same day, both get notified and suggested a place to meet up. Since skiing is a one-day activity, the important scope in this case is the ski area and the fact that both users are there on the same day.”

He contrasts this more contextual approach with the random serendipity of dating app Happn — which, incidentally, just stocked up its coffers with an $8 million raise to fund a global rollout — which matches singles who just happen to pass each other on the street. That’s not very smart, argues Berchtold.

“The information provided by Happn, that you crossed paths, does not increase the chances of meeting someone,” he says. “This may be used as a conversation starter but the context is not relevant. Therefore Blinq is the first mobile application to connect users passively at the right time and right place.”

“We don’t see a future where everyone spends that much time on the cell phone. It’s not possible. There will be some kind of counter movement. So the apps and the dating apps have to become smarter — and actually find out when you’re in the mood or in the right time to meet someone,” he adds.

It’s not strictly necessary to use iBeacons to power the Blinq InstaConnect proximity feature — a smartphone’s own Bluetooth radio could be used for that (and indeed that is a feature the team is also exploring to enable Blinq users to stumble upon each other without needing to be at a specific venue). However installing and controlling static beacons in real world locations has clear advantages — giving Blinq more structured data and more control over that data.

Allowing it to, for instance, know when someone is inside a venue or just passing by outside. This sort of granular, location-based intel can then be fed back into making its app experience smarter and more contextual — or even sold as customer insight back to the venues it’s hoping to sign up as its own customers. The beacon-plus-social-singles-community side of the business opens up multiple potential revenue streams, although Berchtold says Blinq’s initial focus is firmly on dating at this point.

Beyond the Bluetooth-powered InstaConnect feature, the rest of the Blinq app takes a Tinder-style approach to sorting through singles — with users speccing out their gender, age and distance requirements and then being asked to tap ‘hi or bye’ on photo profiles of potential matches. The app has had some 40,000 downloads since launching its Zurich beta last December, and has amassed around 25,000 active users. 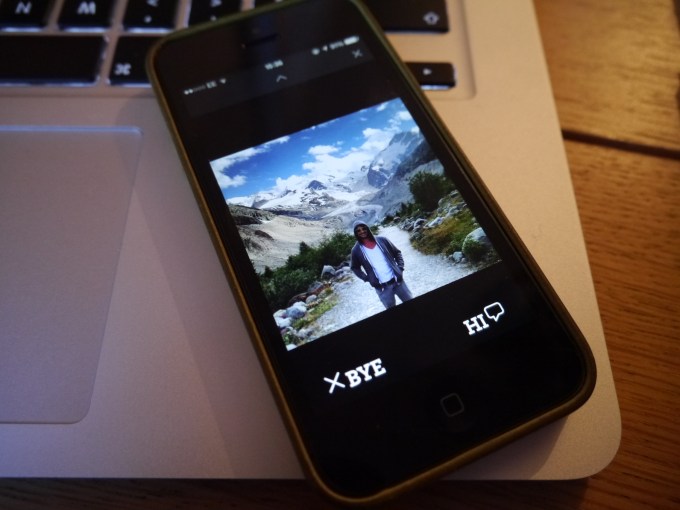 Berchtold says the team is intentionally building a more curated community of singles than Tinder, manually approving each new user by checking factors such as their location and the number of Facebook friends they have (like Tinder Blinq uses Facebook as an identity layer) before approving a newbie to join in order to weed out scammy behaviour.

“The users that we have say that we have a better community [than Tinder] and say they feel safer and also that they swipe more to the right than they do on Tinder,” he adds.

The Blinq team has raised around $500,000 in early funding from Swiss angel investors and also by investing some of its own money, ploughing in proceeds from other projects such as a Bang With Friends style app called Tapster which Berchtold also worked on. It’s also done a media for equity deal with Switzerland’s 3 Plus TV station to help promote Blinq via relevant singles-focused TV shows (such as The Bachelor).

As well as its planned b2b monetization model, Blinq is working on b2c revenue streams via premium in-app features — such as a singles heatmap which will be able to tell users which venues have the highest concentrations of singles in real-time, again powered by its beacon tech. Premium features are yet to come; for now the app is entirely free to use.

On the market expansion front, Blinq’s initial focus is German-speaking countries — with a plan to launch in Munich in Germany in January, followed by major cities in Germany and Austria. After that, in the second half of 2015, it will be expanding to other major cities in Europe, with the likes of London on its radar.

Funding wise Berchtold confirms it’s in the process of closing another round — also of $500,000 — and likely to close by the end of January, which it plans to use to finance this market expansion.