As we enter the second half of this, the Decade of 3D Printing, we are coming to a crossroads. On one hand the Rebel open source RepRap crowd are clamoring to keep 3D printing free, man, while the Imperial forces of 3D Systems and Stratasys – along with countless imitators all attempting to commercialize 3D printing and create the first popular home printer – are locked in a race to the bottom in order to gain market share and users. The resulting dichotomy pits amazingly advanced DIY printers that sometimes explode into a gush of melted plastic and sadness with amazingly advanced proprietary printers that also sometimes explode into a gush of melted plastic and sadness. The XYZPrinting da Vinci 1.0 AiO is firmly on the latter side.

The AiO is a closed box that contains a full ABS 3D printing system as well as a laser 3D scanner. A turntable under the built platform spins objects slowly as a laser takes in their contours and the resulting objects can be printed directly from the scanning software. It is literally a 3D copier with true object-in/object-out systems. In short, it is a Star Trekian replicator – within reason.

First, lets’ take a moment to marvel at what this thing truly is. You can place an object into it and make a 3D copy of that object. If you really think about what that means you realize that we have moved from the age of bits into the age of atoms. While the AiO might not be the best 3D printer in the world it does bring 3D copying into your home or office. Let that sink in. A few years ago that was deemed impossible, the realm of science fiction. But no longer. But that’s not the most amazing thing. The most amazing thing about this printer is its $799 price tag. That’s right: $799 gets you a 7.8×7.8 x7.5 inch build envelope in ABS as well as a 3D scanner. A good color laser printer cost that much in 2013.

But how does it work? Everything about the AiO is adequate. The prints are surprisingly smooth and detailed. A 3D print test I ran (below) passed with flying colors and a Mario star tree topper I printed looked like it could come out of the Nintendo Store. There was no clean-up – the printer prints onto a heated glass surface that is pre-calibrated to ensure excellent prints – and the machine is nearly silent except for the muffled motion of the motor and a small fan. I had no complaints regarding the printing process either although the software was a bit buggy on the Mac.

The scanner was good but required planning. Scanning shiny objects is not recommended and even some detail is lost on matte objects. I scanned a few objects using the machine including a matte plaster gargoyle and a porcelain elephant. You can check the gargoyle out here but the elephant didn’t make the cut. A little lion statue, however, looked great except for some missing pixels around the head. The results, while not perfect, were just fine for printing. Like the photocopiers of old, the quality of the 3D copies that come out of this machine is lacking. I can only imagine what would happen if I printed a copy of a copy of a copy. Perhaps I’d create the first 3D zine? 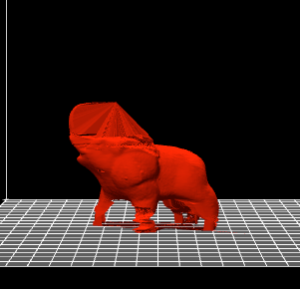 Put these two amazing features together and you get something truly special. Be forewarned, however: the AiO is actually huge, probably twice as big as a Makerbot and a little bigger than a home laser printer. It’s also limited in a few important ways. 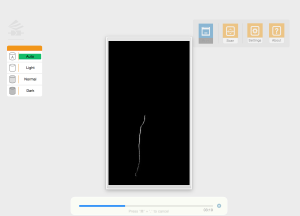 When the AiO worked well it was miraculous. Objects printed onto the glass substrate without sticking and came up like magic. If you’re familiar with 3D printing, trying to dig a plastic part off of a stubborn plate is disturbing at worst and impossible at best. These objects seemed to just slide off like cookies off of a Teflon cookie sheet. When trying to print the gargoyle, for example, the failed spectacularly. Filament balled up into a smoky lump and started to stink. The plastic melted all over nozzle and the resulting clog required a lot of digging with small tweezers to clear. Because the entire machine is inside a closed box access to the print head is limited. This was a testament to the direction 3D printing is heading – all-in-one ease with proprietary consumables – as well as many of the pitfalls. Most hobbyists will bristle at having to deal with a hermetically sealed case and filament cartridge but, as HP and other printer makers well know, the money isn’t in the printer, it’s in the ink.

Therein lies the rub. The AiO uses a 1.75mm ABS filament but requires a special cartridge. This isn’t any ordinary box, however. Inside is a tiny EEPROM that tells the printer how much filament is left in the cartridge and, most important, prevents you from refilling the cartridge on your own. You can hack the cartridge to read “full” again. While the 600g cartridge costs a mere $30, it would still be nice to use your own filament if you have it. This requirement is the first inkling that we are entering an odd new world of DRM-protected 3D printing.

However, if you can accept the proprietary filament and/or are ready to refill the filament cartridges when (and let’s face it, this will probably happen) XYZPrinting stops making these cartridges or goes out of business, you might be in luck. You could also just wait for a more open 3D printer model that uses standard filament and offers slightly better scan quality, but for $799 you might be waiting for a while. In short the AiO is a fascinating, inexpensive, and impressive piece of technology that is well worth looking at if you’re into 3D printing and want to give it a try.