Now you can listen to Spotify like you read the Facebook News Feed. Spotify’s new “Top Tracks In Your Network” is a personalized, constantly updated playlist based on what the people you follow are listening to. It’s available today on iOS and Android in Browse->Top Tracks, and will come to desktop soon.

It’s the latest of many stabs at social by Spotify, but I think this has big potential because it relies on a new Spotify social follow graph instead of your Facebook friends, and it does the work for you. Rather than an endless Facebook ticker of the current songs friends are playing, or browsing static playlists and people’s profiles, Spotify collects what you should hear and lays it out for easy listening. 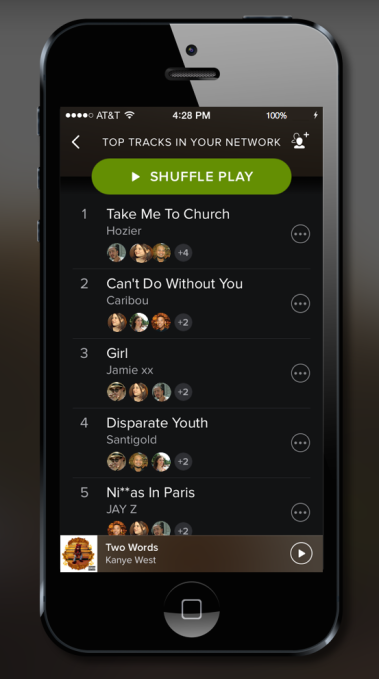 Spotify product manager Miles Lennon tells me “There’s this problem: we have 30 million tracks in the catalogue. So, what do I play?” He says the answer lies in Spotify’s “core belief that music is inherently social.” Spotify used to bombard you with every song friends were playing, or leave you to hope the sent you a song directly. Top Tracks sifts out the best content and delivers it to you automatically.

To make the new playlist succeed, though, Spotify will have to get its 50 million users to build a new social music graph of friends and tastemakers whose taste they trust.

It learned the hard way with its first social integration tht spewed your listening habits on Facebook.

“If you think about the Facebook partnership, the underlying idea is you want to see what your friends are listening to” Lennon says. “What we realized with ‘Follow’ was that the set of friends you want to discover from are far smaller than [your entire Facebook friend list].”

To make it easier to find people to Follow on Spotify, the music streaming service now shows the faces of friends who listen to the artists and playlists you play. You can quickly click or tap through to Follow them and start getting their listening habits in your “Top Tracks In Your Network” playlist. It looks at the past week of what the people you follow listened to, and tries to pull out tracks played by many people you follow, or that one person listened to over and over. You’ll find the playlist if you go into the Browse feature in the navigation menu, then click the Top Tracks button. 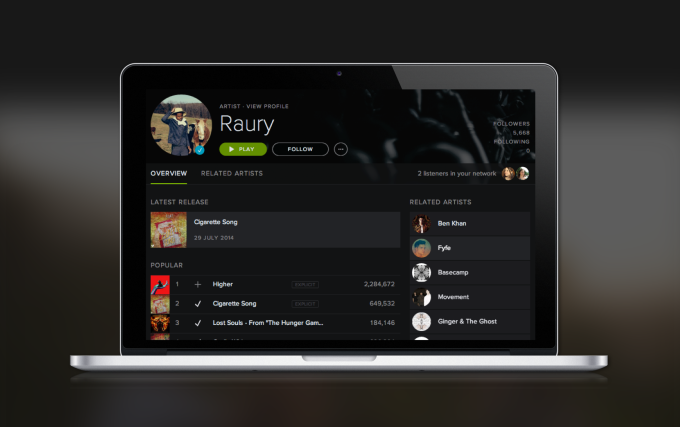 I’ll admit I’m selfishly a bit excited for this new playlist, as its strikingly similar to the dynamically updated, social “Playfeed” feature I suggested Spotify build back in October. “Top Tracks” lacks the editors picks and new releases by artists you follow I imagined in Playfeed, and it might benefit by adding them to help people who haven’t found enough like-minded music nuts to follow. 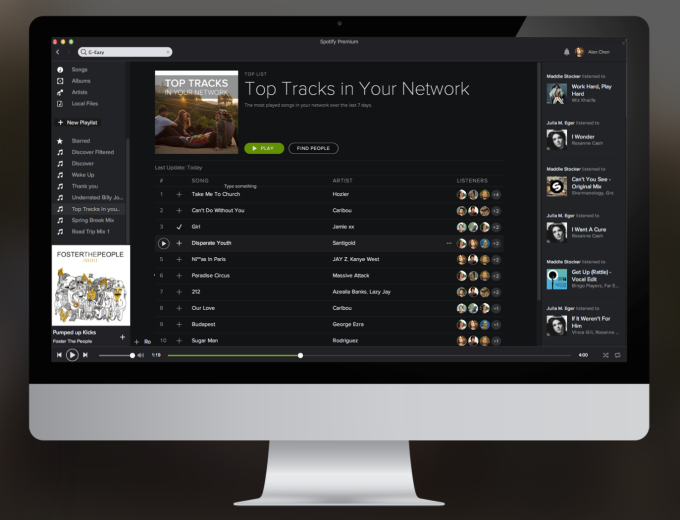 Getting users locked into playlists, personalization, and social connections on Spotify is essential if the music service is going to be able to withstand the onslaught of the Apple iTunes streaming service expected to launch early next year. Spotify has to create reasons for people to stay even if iTunes is cheaper or offers tight integration with their devices.

Music sharing once meant playing a song for a friend on your home stereo. It evolved into sending them a link. But now as streaming puts the entire world history of sound at our fingertips, we need a solution that can scale to send us more recommendations with less effort. By queuing up the very best of what people we trust are listening to without making them do any work to recommend it, Spotify may have figured out sharing in the era of infinite music.