Facebook and Twitter both have introduced ‘buy’ buttons this summer, but social commerce has been around far longer than that. Southeast Asia is one hotspot, and it’s there that Softbaked, the company behind Thailand’s Page365, has raised a $420,000 seed round.

The service started two years ago latching on to a trend that saw Facebook used to market and sell products in Thailand. The clumsy solution was far from organized, with buyers using bank transfers to overcome payments issues, the postal service/meeting in person tapped for delivery, and no system for managing stock, orders, and more.

Page365 aims to make things more professional with its platform that plugs into Facebook and Line, the chat app with 20 million registered users in Thailand, to provide a central point for managing communications, payment, stock, etc.

There’s plenty of demand: Page365 estimates that social media commerce niche is worth $510 million per year in Thailand alone.

The round is provided by Inspire Ventures and existing investor Galaxy Ventures. It will be used to expand the company’s sales and marketing teams, and continue product development — such as finding a way to integrate Instagram, which is hugely popular for commerce but offers a very limited API. 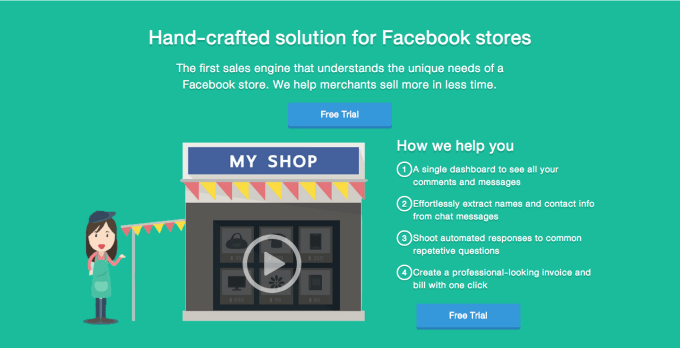 Page365 claims 9,000 merchants use its platform, which recently dropped its $10 per month minimum subscription fee in favor of a freemium model. Now its sole revenue source is a cut of paid-for, value added services offered by partners, such as payments and logistics.

Co-founder Prathan ‘Pop’ Thananart explained that the company will take a revenue hit from its pricing change, but it was deemed necessary to grow its market share in an increasingly competitive space.

“Thailand’s social commerce scene was very quiet two years ago when we started, but suddenly it is very active, with a lot of merchants jumping in,” he told TechCrunch in an interview.

Page365 began early testing in Vietnam this year, and an open beta will launch there soon. Thananart said he sees similarities in social commerce trends in other parts of the region — particularly Indonesia and the Philippines — and already there have been talks with interested retailers in other countries.

He expects Page365 to begin offering its service in other parts of Southeast Asia within the next year, although he did admit that expansion will require a further round of funding.