LinkedIn, the social network for the working world, today gets around 198 million monthly unique visitors globally to linkedin.com spending on average 4.6 minutes per visit, according to comScore, so to help grow those numbers, LinkedIn is debuting a pared-down redesign of its homepage that encourages more interactivity and visits: with analytics (and traffic) on your own LinkedIn profile, the Pulse news feed, jobs, and simplified suggestions for keeping in touch with existing contacts and making new ones, as well as a display ad above the fold.

The changes are being rolled out to all users globally starting today, the company says.

But, interestingly, what you see on the homepage today may not be here tomorrow: LinkedIn is on a bigger mission to incorporate more intelligence into its service by way of anticipatory computing — essentially figuring out the kinds of things that you would like to use on the service and putting them front and center. The page you see today is laying the groundwork for how more of that functionality will be incorporated down the line.

The new homepage is “setting the stage for where we’re going to go, a more anticipatory homepage experience that helps members connect with what matters to them most professionally on LinkedIn,” a spokesperson says. “That means even more context-aware functionality so that our members — who each come to LinkedIn for reasons unique and specific to them — are able to get what they need from us quickly and easily to meet their professional goals.”

The idea with the new page is to remove some of the busy behaviour on the pages, directing users to doing more on the pages by offering less choices. The tile-style layout, where each section operates like its own widget, further that idea.

The profile analytics at the top plays to our vanity — but also includes a link for users to update that profile, as well as drill deeper into getting more data.

Meanwhile, the updates for contacts on the upper right corner is now combined with how LinkedIn will suggest new users to you, offering them in an animated carousel. With both the connection suggestions and updates on users, you can make connections to people right from within your homepage.

Lastly, LinkedIn continues to promote the idea of using its site as a place to consume content relevant to your working life. The news feed includes articles from other sites by way of Pulse, as well as content shared by your network of contacts and influencers that you follow.

For some context, this new look is a far simpler lineup than what is being replaced. In the current iteration, LinkedIn has a long news feed down the left side featuring shared stories, as well as job suggestions and posts from users. On the right, there is a list of possible connections; three small ads; and recent pages you’ve visited, and that’s just above the fold. Below the fold, you get profile analytics; even more jobs; group suggestions; and company suggestions. It’s very busy. 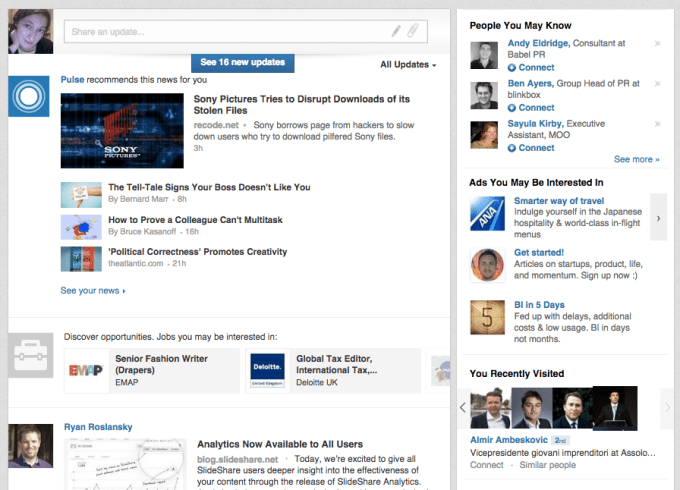 We have seen other instances of LinkedIn applying AI to its products to make them more useful to users — most recently, through a redesign of its contacts app (now called Connected) which acts not just as an address book but as a personal assistant that helps suggest new contacts and ways of strengthening relationships with those you already know.

When you think about it, LinkedIn has always injected some of this kind of anticipatory content into its service — for example with the lists of suggested contacts that it provides to users that seem to eerily identify connections that you haven’t sought out on LinkedIn yourself. 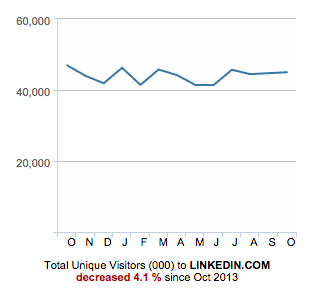 There is another trend in play here that may also be behind the redesign: LinkedIn’s 45 million monthly uniques in the U.S., its biggest single market, is actually a number in decline, down 4.1% since October 2013.

Some of that may be down to growth on other platforms like its mobile app, and some of it may be a wider cooling we are having around older social networks. Facebook’s 131 million uniques in the U.S., according to comScore, is down 5.5% in the same period.

Regardless, it’s a signal that an update is in order.