Last year, Microsoft announced that its consumer-facing Skype communications service and its enterprise-focused counterpart would begin to interoperate, first with IM and audio, and later expanding to support video.

Today, the company says, the video integration is complete.

Skype users can now video call contacts on Lync, and vice versa, Microsoft announced this morning. The change follows a series of deeper integrations between the two products, the latter of which will be rebranded “Skype for Business” sometime in 2015.

To use the now cross-platform video calling feature, you don’t have to do anything differently from before – you just kick off the call the same way you do today. However, video calling is supported only on an up-to-date Lync 2013 client on Android, iOS or Windows and on Skype for Windows desktop.

Skype is now working to expand this integration to more platforms, starting with iOS and Android. 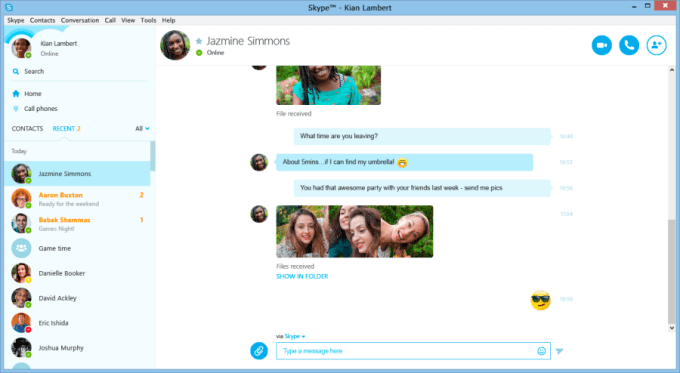 Under the hood of this integration, the teams have worked on the underlying media stack, upping Skype’s feature set along the way. The products now offer built-in security with enterprise class encryption of media and signaling using TLS and SRTP, enabled by default. Additionally, the stream can cross personal and corporate firewalls using STUN, TURN and ICE.

Meanwhile, the video support involves “high quality, scalable video using the industry standard H.264 SVC codec.” Calls will default to use the SILK audio codec, which Microsoft chose because it offers “a phenomenal balance between audio quality, bandwidth utilization and power consumption,” the company explains on its Office Blogs website.

With the technical integrations both behind and ahead of it, Lync’s branding change is clearly more than just a renaming of the product. However, it plays into a larger strategy at Microsoft to create ties between its consumer products and those it sells into the enterprise. For instance, there’s also a OneDrive (Microsoft’s cloud storage service) and a OneDrive for Business.

Next year, as the integrations continue, Microsoft will add support for SkypeIDs and make it easier for users to find contacts in the Skype directory when Lync rebrands to Skype for Business in the first half of 2015.