After denying to TechCrunch that Ektron had been sold, company president Tim McKinnon admitted in a later phone conversation that a sale had in fact happened, after a document confirming the deal began circulating online.

Earlier this week we published a story about the rumor that Ektron had been sold to an unnamed private equity firm. The firm was presumably Accel-KKR, which had invested in the company earlier this year.

Today Ektron issued a sparse press release stating it had received additional funding from Accel-KKR. After receiving the updated press release, we got in touch with McKinnon, who told TechCrunch that it was an equity investment and that no sale had happened.

That was before a document sent to shareholders had been uploaded to the Internet. According to the document, “In April 2014, funds affiliated with Accel-KKR, (“The AKKR Stockholders”), invested $7,900,000 in Ektron. The AKKR stockholders currently hold thirty percent (30%) of the issued and outstanding capital stock of Ektron. The merger will result in AKKR stockholders and other funds affiliated with Accel-KKR owning one hundred (100%) percent of Ektron through the buyer.” 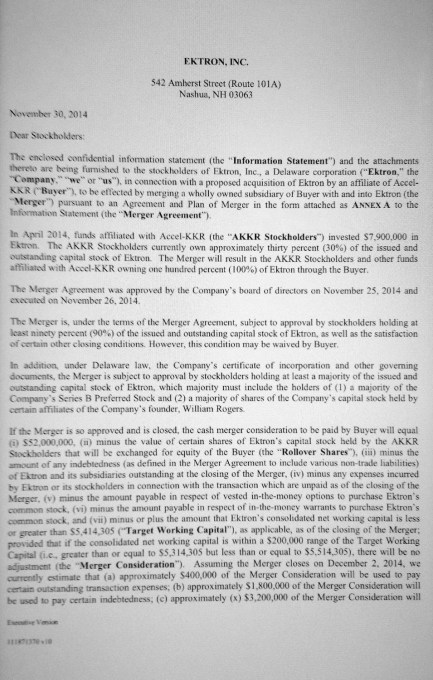 That sure sounds like a full-blown sale to me. When I asked him about it in the second conversation, McKinnon had no choice but to admit there had been a sale, telling me, “The deal closed, Ron on Tuesday at 2 pm. The deal has been closed for days.” When I pressed him that he had denied it earlier, he said, “No it happened.”

McKinnon went onto say he couldn’t say what percentage the Accel-KKR owned, but he said it wasn’t going to be 100 percent when all was said and done. According to him, the company would be reborn under a new entity and some existing stockholders would be issued new stock. Others, as he stated in our first conversation would be bought out giving Accel-KKR and the remaining stockholders more control of the company.

In addition to acknowledging the sale, McKinnon pointed out that whoever posted the document, which he said was the cover page to a much bigger packet of legal documents given to all shareholders, was violating a non-disclosure agreement by doing so.