“SAT test preparation” is a phrase guaranteed to evoke a mixture of horror, anxiety, and boredom in even the most diligent high school student. Mobile game developer Pixelberry Studios, however, believes it can make test prep entertaining by incorporating SAT vocabulary into the latest version of its role-playing game “High School Story.”

The socially conscious startup, which tackled cyberbullying and eating disorders in previous versions of the game, also hopes “High School Story” will help players learn how to cope with the stress of studying for major college entrance exams.

For Pixelberry Studios, the latest version of “High School Story,” which is available for iOS and Android, represents more than just an update. The test preparation features, called Extra Credit, took eight months to develop and include 31 challenges and minigames, with 12 more planned by the end of this month.

Based in Mountain View, Calif., the bootstrapped startup was founded by a team of former Electronic Arts employees, including Oliver Miao, Keith Emnett, and Winston She.

Since its launch, Pixelberry Studios’ has focused on helping teenagers navigate social and emotional issues. TechCrunch first profiled the company in June, when it launched a version of “High School Story” meant to help teens develop a healthier body image and avoid eating disorders.

Dealing with such serious issues might seem like a turn-off for teenagers who just want a diversion, but it has paid off so far—the startup claims “High School Story” has been downloaded 12 million times and earned $9.7 million in revenue.

Pixelberry Studio says it has also educated more than four million teens on cyberbullying prevention, raised $300,000 for anti-cyberbullying charity Cybersmile, and connected almost 40,000 players with eating disorder resources through a partnership with the National Eating Disorders Association. High School Story monetizes through in-app purchases of “rings,” the game’s currency, which can be used to unlock premium features. 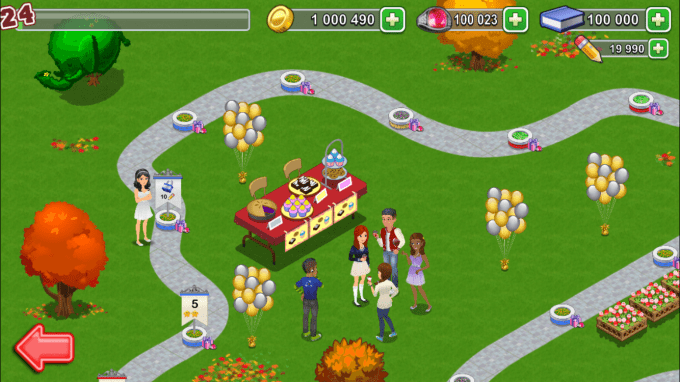 Cyberbullying and eating disorders are complex problems, but it’s easy to see those scenarios fit into High School Story’s gameplay. In addition to building a high school and making friends, each player also encounters a large cast of characters and is given several options to deal with them (for example, if you run into a mean girl or boy, you can choose to flirt, argue, or fight him or her, with each choice leading to different consequences and storylines).

But how can a game studio make college entrance exams compelling to teenagers?

To develop Extra Credit, Pixelberry worked with Jennifer Young and Megan Schwarz, two writers with backgrounds in education. Young, the lead writer for the feature, earned a M.A. in teaching from the University of San Francisco. She also spent several years as a tutor for algebra, geometry, SAT math, and SAT writing. Schwarz recently graduated from Stanford, where she majored in English with a concentration in creative writing, and currently tutors students in SAT Critical Reading and Writing and college essays.

“SAT prep and education games in general are traditionally a tough sell to teens because these players are usually savvy enough to tell when a game is focused on learning first and the fun of the design second. We’ve done the opposite of that,” Young told TechCrunch in an email.

She says that the trick is to incorporate SAT content into the game as fluidly as possible. Since it’s much easier to incorporate words into a role-playing game than math problems, “High School Story” currently focuses on helping students with the SAT writing section by beefing up their vocabulary. 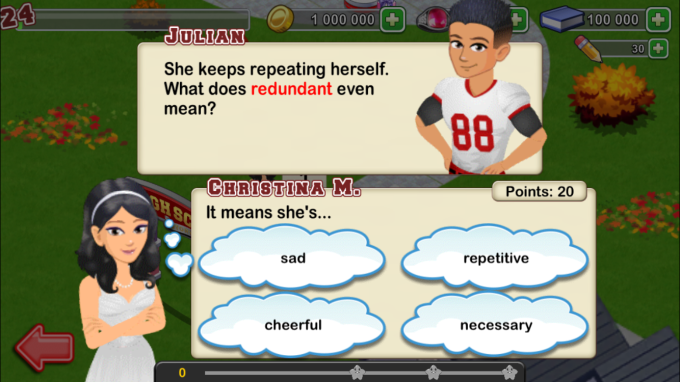 “Narratively, High School Story has an over-arching story about gathering friends for a school that the character builds. High school players encountering the education feature are introduced to a new character, Kallie, a friendly but shy new student who has a big vocabulary and no friends. The incentive to learn new words comes from wanting to see her story unfold and understand when she talks. Additionally, players will be able to earn in-game rewards from progressing through educational games,” says Young.

Once a player learns a word’s context from talking with another character, the game then challenges them with a quiz that asks them to match easier synonym to it. Then vocabulary is tested again in the story by having players chose words to use in other interactions.

To help kids learn how to cope with academic stress, the game takes them through several scenarios. 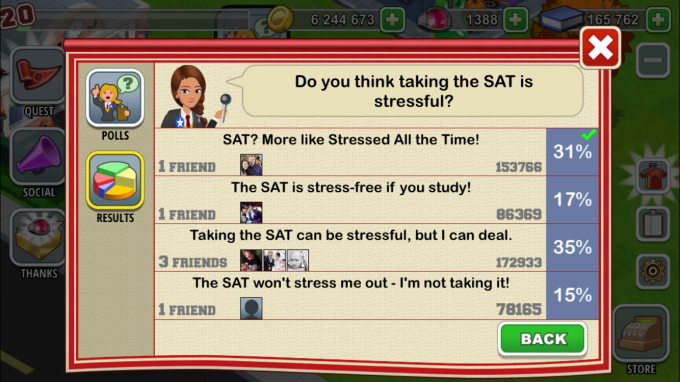 Pixelberry Studio’s COO Kara Loo says that CEO and co-founder, Oliver Miao, began planning for test preparation content before “High School Story’s” first launch in 2013, because studying for tests and the resulting anxiety is a big part of life for most teenagers. While playing “High School Story” isn’t enough by itself to get teens ready for the SAT, it’s a good complement to traditional test preparation courses and apps like SAT Up for kids who need a break from memorizing vocab lists but don’t want to fall behind.

“One classmate in particular, Julian, is struggling with academics and is very concerned about his test scores,” says Loo. “Having our characters in the game face this issue allows us to talk about it in a realistic way and we hope that seeing the characters get past the stress, players will too.”