Call ID and blocking service Truecaller has made its Android app more intuitive today and simultaneously announced that it has crossed 100 million registered users.

The Swedish company, which raised $60 million in October, helps users identify incoming callers to root out unwanted spam and marketing calls without the pain of having to answer them. Building on those base blocks, today’s update introduces predictive features which it believes turns its service into a calling app that supersedes the default option on Android.

Six-year-old Truecaller wants to make the process of reaching people less tedious and taxing, and its new ‘suggested contacts’ feature can help you figure out who you need to call based on your location, time of day and call history.

For example, if you regularly call your other half when you finish work at 5:30pm, Truecaller will offer that up as a calling suggestion if you are in the app around home-time.

“The more you use it, the smarter it gets, and the app will eventually be able to help do the work of knowing who to call so you no longer have to scroll through unnecessary tabs,” the company explained in a statement. 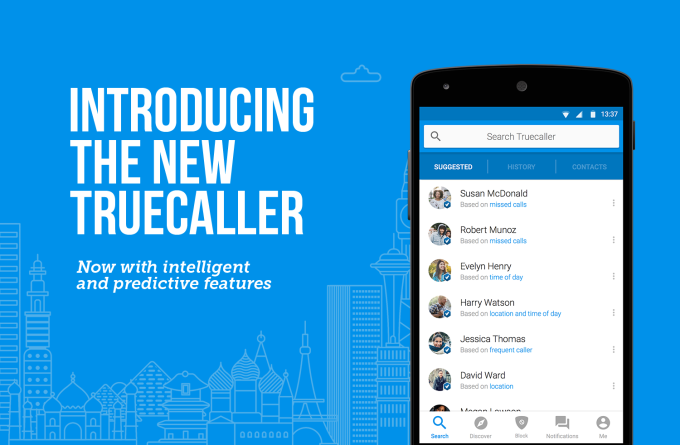 Beyond handling calls, Truecaller also offers an ‘integrated’ phonebook, that’s to say that it marries your contacts’ telephone numbers with their presence on social media, email address, etc. Now the Android app will update your in-app phonebook with these social media details and photos.

The company has also invested in search. Beyond looking through your own contact list, the app will let you peruse its master list of more than 1.5 billion contacts — that includes its existing integration with Yelp which serves up business contact info.

Other changes include a new UI that lets you call or text contacts with a single swipe.

The updates have come to the Android version first, and the company tells us that it will bring the core features to its iOS and Windows Phone apps in early 2015. (Update: Truecaller for iOS has now gotten the features.)

“Our ambition is to have a congruent experience across all platform, however certain features will be tailored depending on operating system guidelines with the devices,” a spokesperson further explained.

Truecaller previously told us that it is seeing strong uptake from emerging markets, and Latin America and Asia in particular, so it makes sense that it is placing a lot of emphasis on Android, which has dominant marketshare in these regions.

Truecaller launched a second, dedicated dialer app — Truedialer — last month, but CEO and co-founder Alan Mamedi said the update to its primary app are designed to make it “more intelligent and personal… to save time for our users and make their lives less complicated.”

That concept is starting to gain ground with users, it seems. Truecaller claimed 85 million registered users when it closed funding in October and now it has surpassed 100 million. The company said it was seeing 150,000-200,000 new users signing up per day two months ago, and it told us that this figure has now doubled.

Truecaller is far from the only company playing in the ‘smart calling app’ space. Google itself added more social graph-powered features to Android with last year’s KitKat update, and it continues to work on enhancing its stock messaging and phone apps. India-focused messaging app Nimbuzz is now a close rival after launching a calling app for Android, called Holaa, which could provide competition in emerging markets, especially if Nimbuzz can leverage its existing distribution channels to gain downloads.

Here’s Truecaller’s own take on what’s new with its Android service (download link):