Today, developers looking to find new users for their Amazon Fire tablet apps can now target those users specifically via Facebook app install ads, says Amazon. Mobile app install ads are a big business for Facebook and others and are an increasingly important means for mobile developers to acquire users as crowded app stores rankings tend to favor downloads and velocity, not newness, and where recommendations are editorial, not personalized.

Starting today, when customers are browsing the Facebook mobile application or from the mobile web on their Fire tablet, they’ll be able to see app install ads that feature a call to action button like “Install Now,” just like other ads for Android and iOS users that point to Google Play and iTunes.

These new ads for Fire tablets, however, will launch the Amazon Appstore client application when tapped, allowing the user to proceed to download the advertised application. 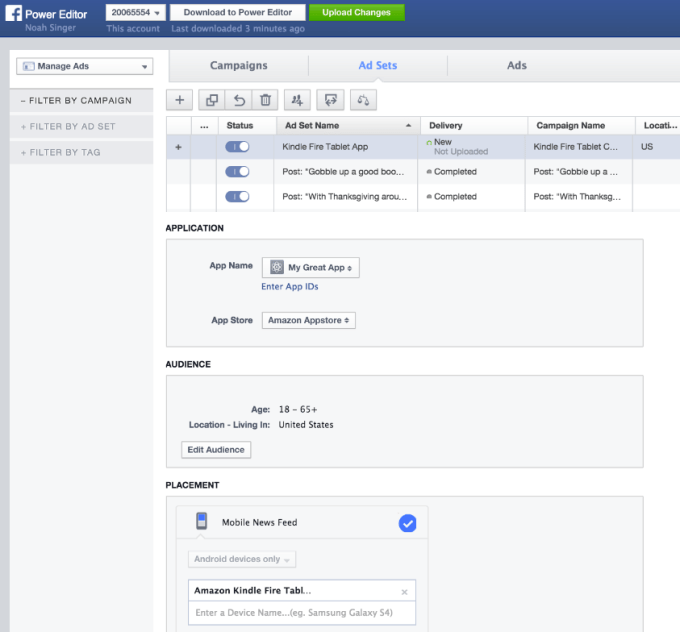 The additional targeting option will allow developers with cross-platform apps to better reach their potential customers, and see how the various platforms they developer for compare with one another. With the installation of the Facebook SDK as well, developers can track how ads convert from impressions to clicks and installs.

Previously, Facebook’s app install ads drove users to the App Store and Google Play, but not Amazon’s. In fact, Facebook’s website as of today doesn’t yet tout this new option.

The addition speaks to Amazon Fire tablets’ and the Amazon Appstore’s increasing importance as a “third ecosystem” for app downloads and sales. While Amazon doesn’t talk about how many Fire tablets it has sold, it did say it sold a bunch of these devices over Black Friday 2014 – Fire tablet sales were up over 3x year-over-year, the company reported this week.