Global restaurant discovery service Zomato pulled in $60 million in fresh funding just ten days ago, and now it’s time to ramp up its monetization efforts after the India-headquartered company introduced advertising within its iOS, Android, Windows Phone and Blackberry apps. The company also told TechCrunch it will begin a cashless mobile payments trial next month.

Zomato, which covers more 100 cities worldwide, already offers ads on its website, but it says mobile accounts for more than half of the 30 million monthly visits it sees across all platforms — that makes this move (potentially) very significant. Keeping in mind that advertising is particularly tricky on small screens, Zomato says its ads spots are designed to add context rather than hinder the user experience.

Ads only appear for search — labelled ‘sponsored’ inside the search results page, to be precise — and are served based on a user’s location and the type of restaurant that is being searched for. Zomato hopes that this combination will allow ads to be effective for restaurants and valuable for users. 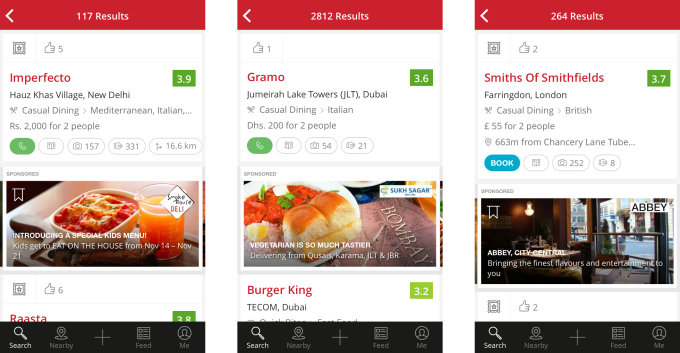 “Merchants have been eagerly waiting for this for a while, but we took our time as we wanted the ads to be as relevant to the consumer as possible. We experimented a bit over the past few months, and we believe we have the right product in place now,” Pankaj Chaddah, Zomato co-founder and COO, said in a statement.

The company is also looking to move up the food chain and go beyond just ‘discovery’ with its own cashless payments system. Chaddah told TechCrunch that a trial will be conducted in Dubai, starting in the second half of next month, among selected customers and selected restaurants.

“This [move into payments] is another layer in the eating out value chain, right now we play in the discovery part of the restaurant and dining experience but we are ready to enter this new space,” he added.

Zomato’s payments system will store users’ credits card (on their device), allowing them to request the restaurant to charge them for their meal via the app, rather than going through the usual process of paying.

“Settling your bill is a 10-15 minute process today, we want to cut that down to just one interaction,” Chaddah explained.

The Zomato co-founder revealed that a larger payments rollout, including trials in numerous international markets, is likely to come in April or May 2015, and that could later unlock new business and revenue opportunities for the company around incentives.

“There’s lots of scope to build reward and loyalty programs around payments,” he said, before hinting that such new initiatives could arrive in Q2 or Q3 2015 in cities where the Zomato payment system “gains critical mass”.

Zomato currently makes all of its money from advertising. The company said it has more than 4,500 paying advertisers across 15 countries, but we can expect that number to increase with this mobile ad rollout and the continuation of its aggressive internationalization.

This month’s fundraising activity took Zomato to more than $113 million in investor money to date, and it will be interesting to see how soon it comes back for further capital once these new initiatives are in full swing.