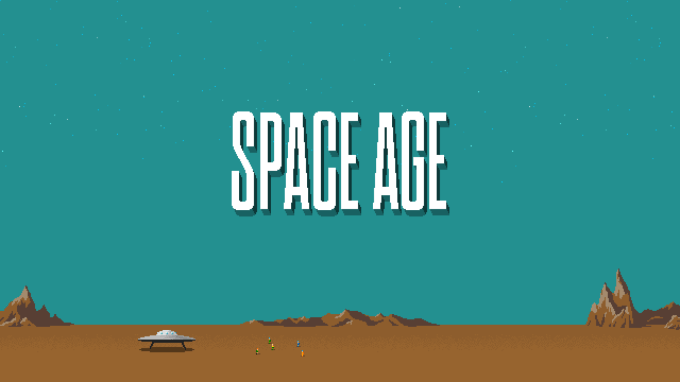 Space Age is an old-school adventure game built for the iPhone and iPad by the developers of The Incident.

It takes place in an alternate timeline where humanity (in 1976) has achieved the fantasy of the 50s: putting people on another planet. It’s almost overwhelming with the amount of nostalgia it inspires, an impressive feat considering the fact that I wasn’t alive when the games, movies, or comics that clearly inspired it were popular.

You play as the youngest member of a group sent to explore a planet with alien life. At first, things are pretty calm. You learn the basic controls by finding the rest of your team and collecting some Nucleum, a material that’s rare elsewhere but so bountiful on this planet that it crunches under your feet as you walk.

It soon becomes clear that your team is not the only intelligent life on the planet. As you encounter aliens, things get a little weird. Upon discovering some symbols in a temple delineating the history of these creatures, Space Age’s story takes an unexpected sharp turn into Twin Peaks territory as you experience a series of trippy visions that waver between the protagonist’s past and present.

All of this is presented through gorgeous pixel graphics straight out of an adventure game from 20-30 years ago. Everything is drawn in a retro-futuristic style, with more detail given to the environment than the characters themselves (which means you get to use your imagination a bit). 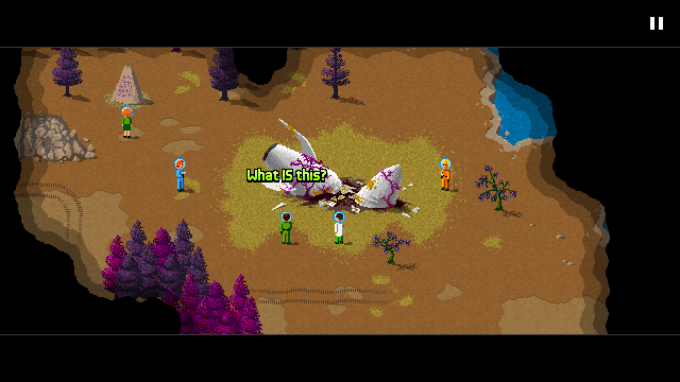 As Space Age loads, it recommends you play with stereo headphones. I agree — the game’s music is charming and the sound effects change slightly based on where you move the camera in relation to where sounds are coming from. It does a lot for immersing you in the world despite the fact that you’re playing on a small screen.

None of the dialogue is voice-acted, so you’re going to be doing a bit of reading. The plot is interesting enough, though I do wish that the game would let you skip a few more interactions that you’re forced to watch over and over during some of the more challenging puzzle segments.

Speaking of which, Space Age plays very much like the old adventure games that inspired it. You spend much of your time just walking around, trying to figure out what the game event wants you to do, tapping around the screen to reveal more of the map in the hopes that some clue will reveal itself to you (or that you’ll luck out by accidentally tapping the part of the environment that sets off the next plot event).

Some of the more challenging puzzles put your character in harm’s way. Whether it’s an alien with a blaster or a vision that puts you at the edge of madness, most of these will require you to try at least a few times before you figure out exactly what you need to do to survive.

Space Age has a checkpoint system, so most of these setbacks won’t waste more than a few minutes each. Still, this is a game best played when you don’t have time constraints. Despite being packaged as a mobile title, I enjoyed Space Age most when I was at home or on a long plane flight — failing a puzzle felt far more frustrating when I only had minutes left on the train during my daily commute.

Fans of adventure games will find Space Age’s $4 entry fee well spent. Whether you’re playing on a phone or tablet, the game’s touch controls are a perfect fit to the style of gameplay, and there’s not much else like it out there in the sea of free-to-play games and action-heavy premium titles on mobile today.