You can run. You can hide. Hell, you can even turn off the lights. Do what you want, but this thing will get you… a complimentary t-shirt.

Meet the KinectKannon, a semi-autonomous t-shirt cannon that can track your movements, go into night vision mode, and fire t-shirts into a crowd. It’s like T-1000‘s dopey little brother.

Built by Microsoft developer evangelist Steven Edouard, the KinectKannon is largely built up out of store bought parts — including, as you might’ve guessed from the name, a Kinect. Add a few heavy-lift servos, some super snazzy solenoid valves, and a few thousand lines of code, and you’ve got yourself a robo-cannon. All in all, the project cost around $2,500.

Given that this project deals with high-PSI CO2 tanks (which will quite happily blow your fingers/hand/face parts off if not handled correctly), this… probably isn’t the sort of DIY project most people should take on in their garage on a spare weekend. But if you think you’re up to the task, Steven is sharing the source code here. 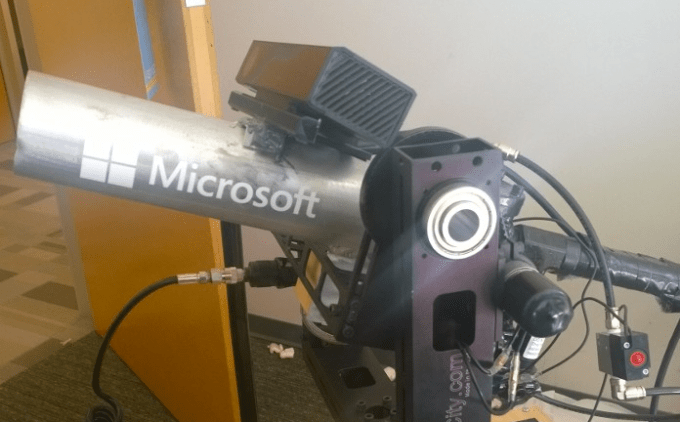