A new site called Spaces is now launching as a place where mobile app designers can showcase interactive prototypes of their work, or browse one of many common user experiences from other popular apps – like the navigation in Facebook Paper, or how Dropbox’s Carousel app appears to first-time users, for example.

The service is akin to a “Dribbble for UX.” Or, in layman’s terms, a place to showcase interactive designs in a way that’s similar to Dribbble.com, or even Behance. On those sites, designers host and share static or animated images, but Spaces features interactive prototypes that you can try for yourself on your preferred mobile device.

Spaces also somewhat competes with a site called Capptivate.co, which records videos of interesting mobile UX (user experience) design and other interactions. But instead of just being an app prototype showcase, Spaces works as an extension to the service from Proto.io, a well-known mobile app prototyping platform. 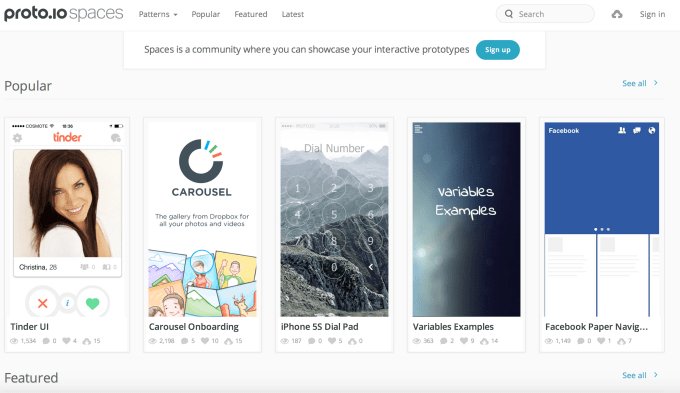 Now U.S.-based, Proto.io originally emerged as a standalone entity after being spun out of the R&D department from European digital agency SNQ Digital. The company had been looking for an easier way to communicate and share prototypes and ideas with clients without the need to code, so Proto.io was born.

The service offers a drag-and-drop interface for designing mobile apps, and includes components like navigation bars, text menus, toolbars, forms, and more, which can be quickly placed into an app mock-up that can be viewed in the browser. This demonstration can be interacted with as if it’s a real app, and it can be viewed on an actual mobile device – like an iPhone or iPad – in order to best mimic the real-world experience.

With Spaces, Proto.io users can import prototypes into their account in order to re-create their favorite interaction designs.

Meanwhile, the site itself is more of a social network for the UX community, allowing them to leave feedback on designs, vote up favorites, like, comment, share, and more. The site has been in development for some time, getting feedback from UX and interaction designers along the way. At launch, its tie-in to Proto.io means it’s accessible to 85,000 Proto.io users immediately. Newcomers, however can sign up for a Proto.io account to join Spaces.

Ultimately, the goal for the service is not to function as a standalone business, but to draw more attention to the company’s Proto.io prototyping tool, and hopefully convert designers using Spaces to paying customers.