Path, the messaging/social networking company, made a major move towards commerce when it launched its new Talk app this summer. One important component of that app, ‘Places’, lets businesses and customers connect and communicate via text — and that service has now expanded outside of the U.S., hitting the UK, Ireland, Australia and New Zealand today, the company announced.

It’s been a difficult past 12 months or so for Path — which has struggled in some markets, made layoffs, and lost key executives — but the idea behind Places is a solid one. If you have a question about a product or service, you should be able to text someone and get an answer quickly, rather than having to travel to a store, or make a call and get routed through various teams or automated switchboards.

That’s Path Talk Places, although until now it has only been open to those in the U.S.. Path has a team of operators (and some business themselves) who are on hand to answer users’ questions and queries related to businesses, retailers, shops, museums and another locations that they find via the Places tab inside the app. Once you send a question, a representative begins chatting to help find you the answer. 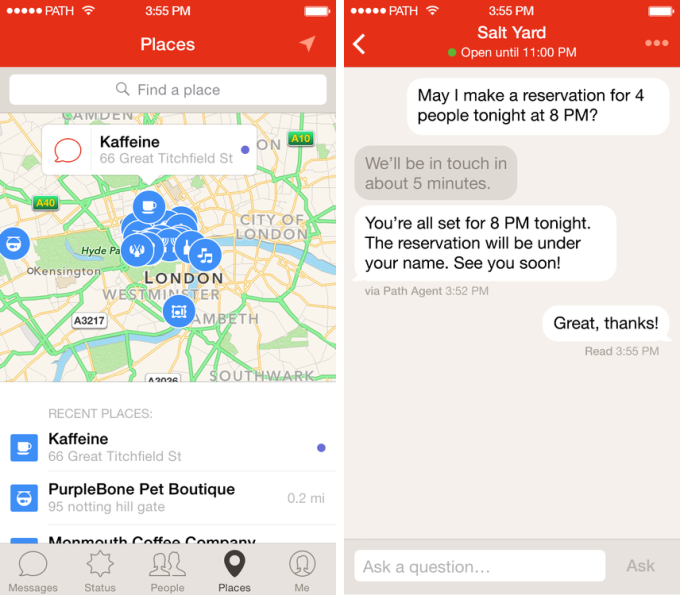 Connecting companies with customers is something that we’ve seen in Asian messaging apps like WeChat and Line, which offer ‘official accounts’ that brands can rent to reach users who opt-in to follow them, but Path Talk’s representative- and location-based approach is a practical spin on that.

Of course, the success of Path Talk hinges on being able to generate quick and efficient results and attracting end users in the first place — and that’s no given since Path has struggled to gain serious traction in many international markets, Indonesia aside. But the idea is one that has plenty of merit, in theory at least.

Note: The original version of this story was updated to correct the way that Path Talk works with its own representatives, rather than representatives from specific companies.