Don’t doubt the commitment of MIT graduate and Dynepic co-founder Krissa Watry. She used to work for the U.S. Airforce as a chief engineer designing and building aerospace hardware and helping launch satellites. But working on kit destined for space was a just stepping stone on the road to her real dream of becoming an entrepreneur.

“Going to space is cool but I really feel like developing a consumer product that can change people’s lives — that’s what tugs at my heartstrings and gets me up everyday,” she says. “Opening Dynepic was really my lifelong dream. Developing consumer products as well.”

In 2011 Watry quit working in the aerospace industry to set up her product design company. The initial focus for DynePic was fitness products, but it’s now spun off that business (as Dynepic Sports) and Watry and her co-founder have shifted fully to “hard charge” at connected toys.

“I really think kids have an exciting future and I want to help give them all those enablers,” says Watry. “Toys to me were one of my big enablers for why I got into engineering. Probably unlike a lot of females I had a lot of different gender neutral, robotic style toys and it did really help influence what I liked.”

Dynepic’s mission now is to build what Watry dubs the Internet of Toys (or IoToys). Aka an open platform allowing toys and various digital cloud services to be linked together via the power of open APIs. The emphasis for Dynepic and its IoToys grand plan is squarely on educational play — enabling learning of technology and engineering type skills through kids using physical toys linked to a tablet-based programming interface that lets them configure their function, and even pull content down from the web to extent their play.

“I’ve been an early adopter of a lot of connected, Internet of Things technologies like Ninja Blocks and Smart Things. What always got me was this stuff existed but nobody had really embraced it,” says Watry. “Kids are really the early adopters of technology. They’ve less questioning and they’re more [curious]. And so we said what if we could teach through that adoption?”

Watry’s co-founder has a background in early years education. The pair were able to secure a National Science Foundation grant of nearly $200,000 to work on their idea, back in 2012, as well as taking in $50,000 in match funding from the South Carolina Research Association.

To get its IoToys vision going, Dynepic has been developing its own connected toy, called the DynePod, which it’s launching today on Kickstarter — looking to raise a further $30,000 in crowdfunds to turn the prototype into a connected toy that kids can get their hands on and use to build their own apps. The funds are needed to cover production costs, child safety testing and to pass muster with the FCC, as well as for finalizing its cloud APIs, says Watry. 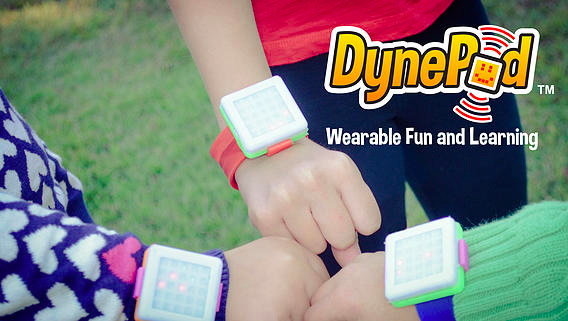 DynePod’s twist in being both a toy and a STEM skills focused learning tool is not unique. Indeed, we’ve seen an influx of kid-friendly coding initiatives in recent times, such as the recent Kano Raspberry Pi-powered DIY computer, or the Tynker iPad app for kids to learn programming to name just two. Helping kids learn tech through playing with gadgets is already a well-ploughed furrow but then the mission of upskilling and inspiring the next generation of coders and engineers is a huge one.

“There are a lot of people in this space,” concedes Watry when I point to others playing here. “A lot of people are more focusing on the coding itself, so Wonder Workshop, previously Play-i… Tinderbots, and even LittleBits. What we’re trying to do that’s a little bit different is one the DynePod itself is a self contained device…  [But we’re also] working to build this whole open platform that’s going to allow toys to safely connect wirelessly to each other, and then also drive down this cloud content — so we’d be linked to not only other toys but cloud services, and so by doing that we can drive down relevant information that is of interest to the child and the parents for their child’s learning.”

So what exactly is the DynePod? It’s a small Bluetooth connected box with an LED display on the top and a range of sensors inside so it can detect things like movement and the proximity of other DynePods. Feedback can be provided to the user by displaying a particular graphic on the screen, or vibrating, or buzzing. The DynePod can be combined with a slap band to make a kids’ wearable, or attached to other objects or toys — including Lego, via a clip with a dedicated Lego attachment. It uses includes Digital’s BLE chip which hosts the Arduino bootloader — so the DynePod is also Arduino programmable, offering additional tech learning potential.

The device supports four basic modes of use, according to Watry: a standalone mode, so using the pod plus a tablet to create custom applications; or linked to other DynePods to communicate and play with other owners of DynePods; or it can be used as a controller for playing tablet games via the DynePod app; or there’s what she calls a fully connected play mode, which leverages open APIs to link the DynePod to all sorts of other cloud services. The last part is obviously mostly vision at this stage in the DynePod’s development.

“It’s really just the first of many, many toys that we hope to be connected. Many of our toys, and many of other people’s toys. The goal is to try and create this open environment to connect toys and help drive smart content. That’s really where we would come in — as being a gatekeeper to make sure the play remains safe for our kids. And all those hooks are in there for parents. But there’s a lot of people developing really cool learning algorithms and stuff and our goal is not to do it all but to be an instrument to connect those cloud services and help them expand the play for kids,” says Watry.

“Right now the number one toy for kids is tablets and a lot of parents complain that their kids are getting stuck behind it. A lot of that is because there’s a vast visual playground there that they can control. And so if we can give them more control of their three dimensional place we believe we can not only get them exploring their world again but using technology which they need to know in order to survive in the workforce that they’re going to be part of,” she adds.

The DynePod is programmed using Dynepic’s If/then simplified language running on a tablet (initially it’s iPad only). This is designed to be far simpler than other graphical programming languages for kids, such as MIT’s Scratch, says Watry. 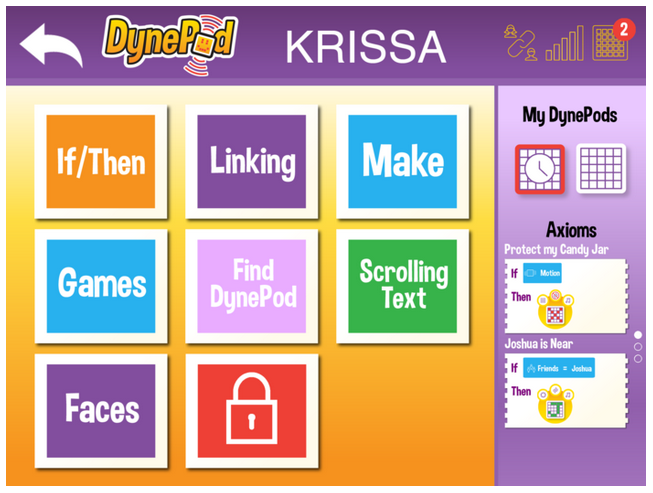 “Our goal was this: to really try and hit the 95 per cent of kids that maybe aren’t completely drawn into the technical background. Get them into it so that it’s easy enough for all kids, and then easy enough for the parents, to be able to interface with it,” she says. “Our first creation for that language we’ve tested in the classroom and then out in public settings over a year ago and just constantly refining the interface to work as easily as it can, and be as intuitive as it can.”

Using this If/then tablet interface a child could, for instance, build a program to make their DynePod sound an audible buzzer when it detects movement to protect their candy jar from their siblings. Or — in future, when other services are linked up to the platform — connect their DynePod to a digital weather service to display a visual notification if it’s going to rain tomorrow. 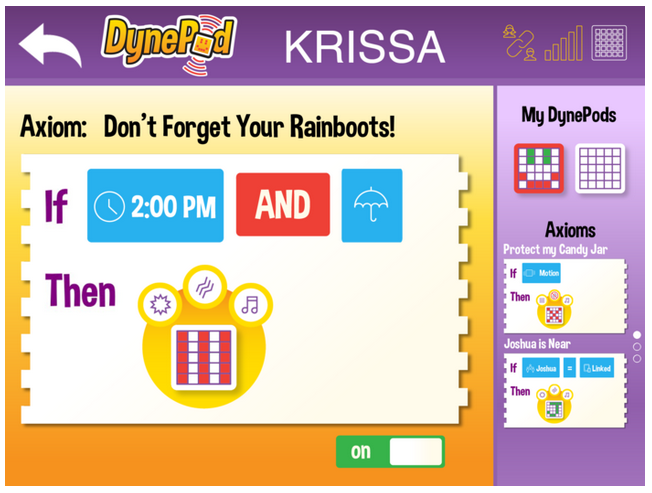 While the original idea for the IoToys came to Watry back in 2011 she notes that the technology available to power it has changed a lot since then, with connectivity now focused on the Bluetooth Low Energy flavor instead of Zigbee, for instance, and lots of other developments allowing the DynePod to take shape.

“The technology obviously greatly changed from when we looked at it in 2011. A lot of things were on Zigbee. And then there’s the mobile pairing with Bluetooth and Bluetooth LE coming out with the power consumption benefits and the size coming down, and then the Arduino operating system being hosted right on the BLE chip. It’s big enablers for us to package this up into a tight package,” she adds.

If it achieves its funding target Dynepic is aiming to ship the first DynePods to backers next June. The earlybird Kickstarter price for the DynePod is $79 which also includes a universal mounting clip, a silicon slap bracelet, USB charger, and a 3D printable file to print additional accessories for the DynePod.