Edward Snowden may have gone public with his NSA leaks more than 18 months ago, but the rate at which we learn new information about government spying programs shows little sign of slowing. Witness today, the Wall Street Journal published a report claiming that the U.S. Justice Department is “snagging [mobile data belonging to] a large number of innocent Americans'” via technology that can identify criminal suspects using planes.

The WSJ cites sources who claim that the U.S. Marshals Service is using fake cell towers on airplanes — dubbed ‘dirtboxes’ — in order to access data from phones located on the ground.

Essentially, the dirtboxes pose as legitimate network operators, providing signal to devices which, it is claimed, can allow them to prize registration and identification information from a ‘target’. When successful, this removes the time-consuming need to go through mobile operators to gain these details during searches for suspects, it is argued.

The latest version of the technology can even interrupt signals and grab information, such as text messages or photos from a device, the WSJ says, although modifications are said to enable 911 calls and other privacy allowances. 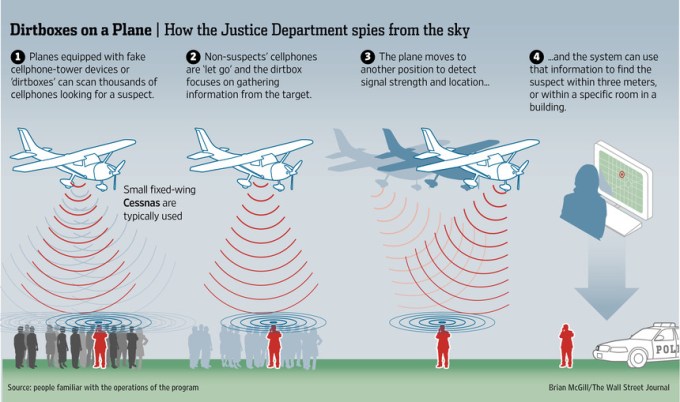 The technology, which has apparently been deployed in other fields by the military and is used on planes “on a regular basis”, is — like so many other security programs that have come to light over the past 18 months — described as a “dragnet” that also pulls in information from innocent people in the vicinity without so much as a court warrant or warning.

Though sources told the WSJ that data from ‘non-target’ phones is “let go”, it isn’t clear how that information is stored and the processes involved with its disposal. These are clearly important questions that need answers.

As ever, responses to this news will largely fall into two categorizes: those who believe that the U.S. — and other governments — should do everything within its power to find and apprehend criminals; and those who feel that the government is again running roughshod over privacy rights.

Certainly, if information from all cellphones accessed is being stored on file — and the WSJ was, importantly, not able to establish or report on that — then there’s significant cause for concern once again.

Update: The original version of this story has been updated to correct that the program collects data from devices on the ground not on planes.