I live in a fourth floor walkup in Bushwick, Brooklyn. The building is old — I have to hide from hot water in the shower whenever a neighbor flushes their toilet and my floor is legitimately slanted toward one side of the house. My across-the-hall neighbor has come home to a broken-in, robbed apartment three times. In short, I am the prime candidate for a home security system, but traditional big players offer pricing that I simply can’t afford.

So I decided to take a look at the Scout Alarm.

The Scout Alarm is a customizable array of sensors and a ethernet-equipped smart hub. The sensors work together to monitor movement in and around the house, and then communicate that movement to your smartphone. There are various “modes” you can put the home in, like Sleep, Away, and Vacation, and each can trigger various responses.

The hub also houses a 106dB siren that goes off when an intruder has gained access, and Scout offers an option for professional monitoring on a monthly basis. 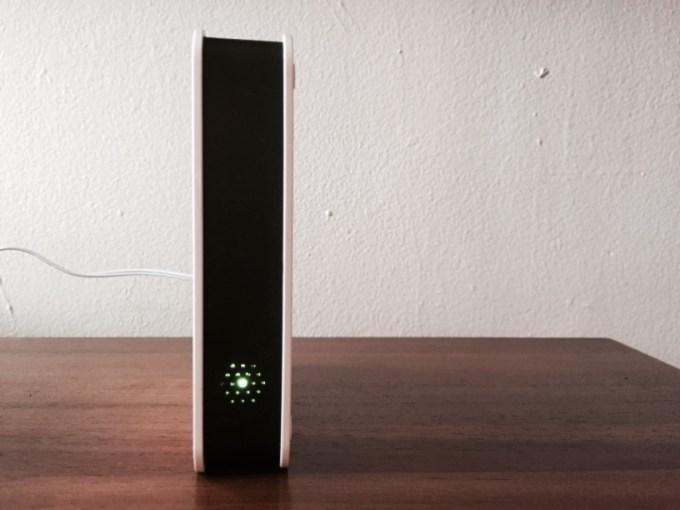 Installation of the system requires no holes in walls, no drills, and no hammers. Sensors are attached with adhesive on the back, and some are designed to be functional sitting on a shelf, as well. It’s an easy set-up process, with clear instructions on how to set up the hardware and pair the software. And once you’re done, the system just works.

Scout Alarm offers a number of sensors and lets you configure your perfect system. You start with the Smart Hub, a discreet device that can go on a book shelf or rest on the media console. The only requirement is that it’s close to a power source and can hardwire into your router’s ethernet. The Hub comes with 72-hours of wireless data so that you can get set up with the system, even if you can’t get directly connected to Ethernet. 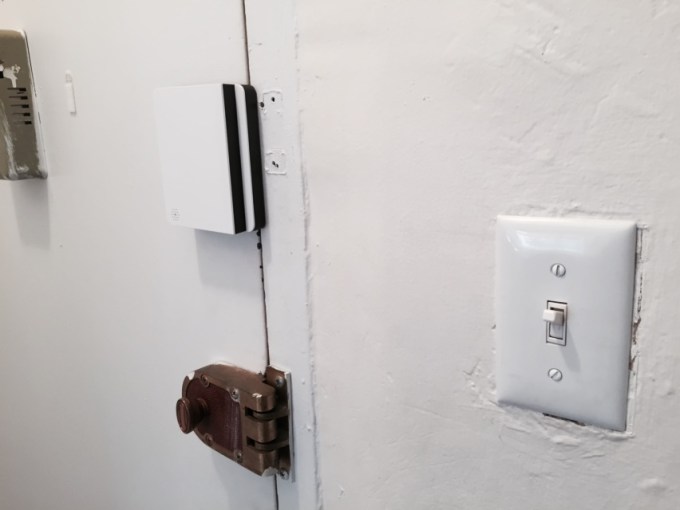 The door panel is about the size of a passport, though maybe twice as thick, and has its own speaker, which emits a beep each time you leave and goes off with the hub when the siren is triggered.

Scout also offers motion sensors, which have a front surface area the size of a credit card, with a little, motion sensing bulb protruding from the front. They are flat on the bottom, so you can plop them down on a shelf (as long as it’s about five to six feet off the ground) or adhere them to a corner of the room. The motion sensors can detect movement during the day and the night, with a reach of 25 feet and a 90 degree field of view. 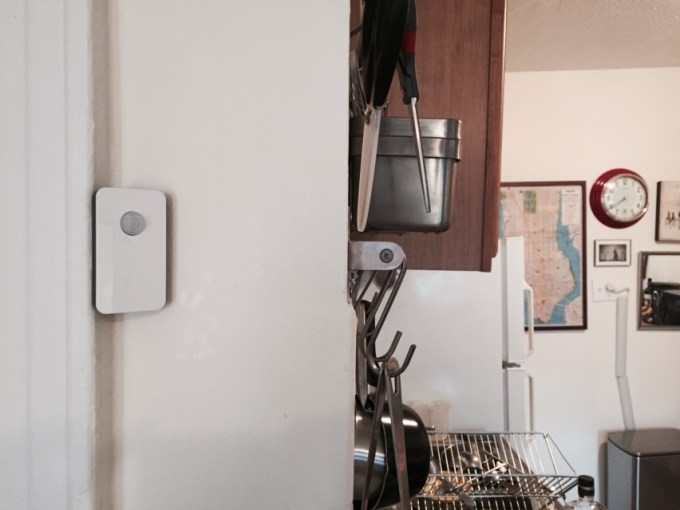 You can add another layer of protection through access sensors, which are pretty small and continuously monitor anything that opens or closes. I have them on my windows, but you could theoretically put them on a safe, an outside gate, a liquor cabinet, etc. Access sensors are very similar to the door panel, using two pieces to decipher when an access point has been breached, though they don’t come with the RFID or the speaker.

And finally, Scout offers an HD video camera that streams 1080p video to your smartphone or computer continuously. You can watch live, with audio and night vision, or access backups so you can keep an eye on what’s going on in your home. In fact, the Scout camera comes with two-way audio so you could theoretically yell at (and scare the shit out of) any intruder. (Full Disclosure: The Scout camera is on back order so I didn’t get a chance to test it, so I’m just going on the description for this particular piece of hardware.)

The hardware all comes in three different colors: black, white, and walnut.

You can control the Scout Alarm through a web dashboard or a smartphone app. The hub speaks to the other sensors and the software via 802.15.4 lightweight mesh.

Both the app and the web dashboard offer a way to add new sensors at any time by simply pairing, finding a good spot in the home, and giving the sensor a name. From within both, you can edit all of your “modes” to offer the right reactions to various triggers. 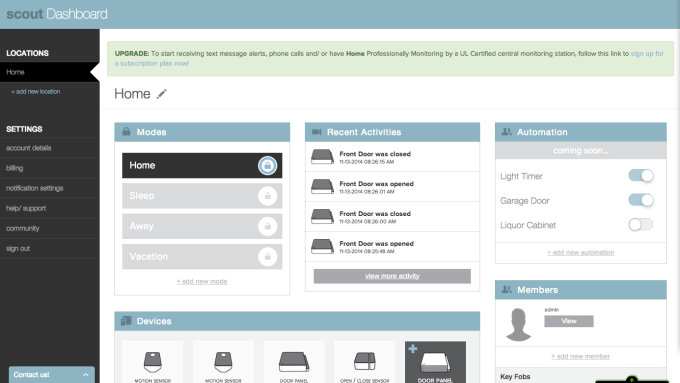 For example, when I put my Scout on Sleep Mode, it is set to fire the alarm if the door panel or the window access sensor is triggered, but the motion sensors are turned off in case I get up to get water or go to the bathroom.

In Away Mode, all the sensors are armed to set off the alarm and send me a text message telling me what’s happened. On Vacation Mode, the same holds true except that I can also send a text message or email to a friend who lives nearby to come check things out and probably call the police. 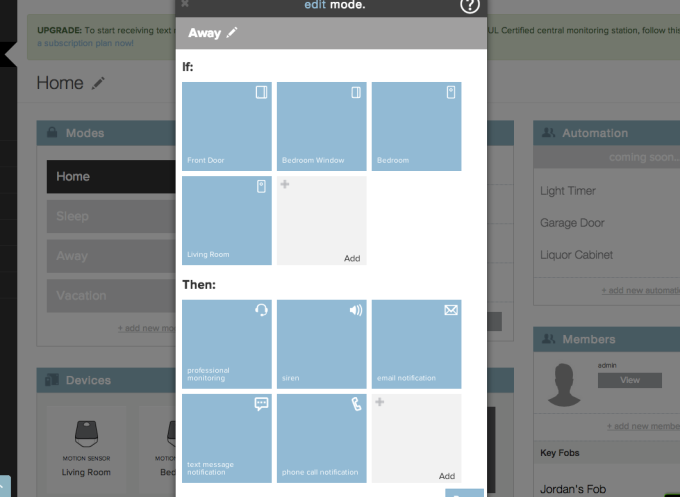 The app is the easiest way to be 100 percent sure that your system is armed or disarmed or in a certain mode. You can use the RFID tag to quickly and easily disarm the system when you enter on Away Mode, which in my place triggers the alarm, but I feel more comfortable arming the system with the app, where I can be sure. In other words, the door panel beeps to signal arming or disarming, but there is no differentiation between arming and disarming. I worry I might accidentally disarm the system as I leave, and I wish that Scout would use a different color for the LED signal to say armed (red) and disarmed (green).

Scout offers a special home monitoring plan called Always On and Always On+. Always On offers battery back up and a 3G connection if your power or wifi ever goes out, to ensure you can still keep an eye on things. Always On+ offers the same perks along with 24/7 professional monitoring so that the police are called as swiftly as possible.

I only ever had one small issue getting started with Scout. If you activate multiple sensors too early, the Hub has trouble pairing with them. In Scout’s defense, the instruction manual says explicitly to not activate (by pulling one of those little plastic tabs) more than one sensor at a time, you could run into this issue. Luckily, the front panels of the sensors are easy to remove, and the problem is quickly solved by removing batteries and ‘re-activating’ the sensors.

Beyond that, I’ve had a truly seamless experience with Scout. It took about an hour to install the Hub, a door panel, two motion sensors, and an access panel on my bedroom window. The other windows in my home would require spidey senses to break into, and I live alone, so that array is more than enough for me to feel safe and secure. And while I didn’t get a chance to see the live video monitoring, I don’t think I’d want a live stream of my home going through the cloud.

When you compare this to the Canary, which is the closest competitor in price and function, you have to weigh out what’s important to you. The Canary only costs $200, and monitors things like temperature, air quality, and also offers 1080p live monitoring. However, the Canary is a single piece of hardware that is meant to watch your place without actually monitoring entry points.

Scout won’t monitor the air quality in your home or hook into the smoke alarm (for now), but does offer an added layer of security with the access sensors.

The company has raised more than $474k in its own pre-order campaign and is now shipping. They are also partnering with Lockitron and IFTTT to start automating home security.