Today on stage at AWS re:invent in Las Vegas, Andy Jassy, senior VP for AWS announced a new product called AWS Service Catalog that lets administrators set up a portal with a variety of services configured as they wish, while providing a way to track who is using the services for compliance and perhaps charge-back purposes.

The promise of the cloud has always been the ability to set up a set of services for your users, but up until now AWS has lacked this ability to create sets of pre-configured services.

Jassy explained that with this new tool, customers could set up a catalog of service offerings that make sense to their organization. The IT administrator could configure these offerings, then set up a service portal that the company hosts where end users could come and deploy these packages without IT help.

End users could also launch a product as a set of AWS services, but regardless of the deployment method, you can track all of this activity for compliance and reporting purposes at whatever level you need (user, department, group, etc) using the Cloud Trail tool. 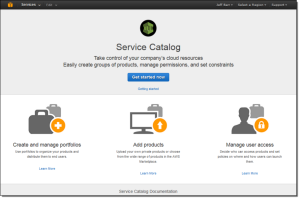 Having this ability to create catalogs of services gives IT admins more control over how they define and deliver the services they are offering in the cloud, creating sets of tools in different configurations to meet the needs of different entities (departments, users etc.) in their companies. For example, they could create sets of service offering such as compute, storage and memory in configurations that make sense to their user base.  Then they might want to create a LAMP stack for developers and SharePoint groups for end users or departments.

This would enable administrators to deploy applications and control just how many licenses were in place, then create an audit trail report to make sure they were in compliance with the software contracts they have.