Containerization is a new trend that offers a more efficient and faster way to deliver applications than virtual machine technology. In a sense, it’s another step in virtualization that takes the concept and strips it down even further to produce greater resource efficiencies and faster deployment.

Today’s Beta release is a step toward providing a full enterprise-ready containerization stack, and Red Hat Enterprise Linux Atomic Host is the platform on which you can build your container technology. By releasing it to Beta now, Mark Coggin, senior director, product marketing, platform at Red Hat, says it will allow ISVs and others to build certified containers to run on the host platform. Obviously, this is to give customers confidence that the containers they are using have been built to work with and take advantage of the Red Hat platform. And of course some companies will build their own containers as well. 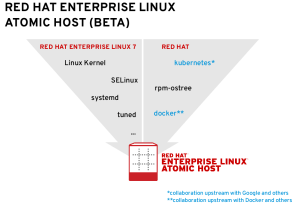 Coggin says the idea here is to build a container that contains the application, some run-time libraries and a stripped down version of Linux, to deliver the core services required to run the application. Coggin says by stripping down Linux and delivering it in this fashion, it makes it more portable, easier to deploy and simpler to maintain and manage.

He says this is not designed to compete with the popular Docker container technology. In fact, they are working with Docker and are using Docker within the platform. The release also includes Google Kubernetes support, which gives users access to an important orchestration layer to manage the container through its lifecycle. Coggin pointed out that they have been working with Google for several months on Kubernetes, so it’s very early days, but it adds an important management piece to the stack.

What’s more, instead of hours to stand up a physical server or minutes to set up a virtual machine, you can set up and launch a container in about 10 seconds, Coggins said. For companies looking for greater agility and speed, this gives IT the ability to react to the needs of lines of business almost instantly and that’s a tremendous advantage in today’s increasingly competitive environment.

And it’s not just speed, because these containers are so efficient in design and so stripped down, instead of an average of 10 VMs per server, you could get 100 containers, and that’s a huge difference in terms of cost to run your data center.

Coggin notes that today’s Beta release does not allow for multi-host orchestration. For today, it only supports a single host implementation, which takes away from some of the efficiency you can achieve by deploying across multiple servers. But he says, this is still a very early release and Red Hat plans to offer multi-host support in a future release. He didn’t say when that would be, but he said it would be coming eventually.