Singles’ Day, the largest online shopping day in China/on the planet was yesterday, and — as many predicted — a spate of companies set new sales records for the shopathon.

Alibaba, the retail giant most synonymous with the 11/11 bonanza, matched its revenue from last year with 10 hours still remaining, and Xiaomi — the smartphone-maker getting a lot of attention right now — also set a new best. Hugo Barra, Xiaomi’s VP of International, tweeted that the company generated $254 million in revenue from selling 1.16 million phones.

Earlier in the day, Barra revealed that the company reached ¥100 million (US$16 million) in sales after just five minutes. Xiaomi matched its performance from last year’s 11/11 event — revenue of ¥550 million (US$90 million) — within four hours of this year’s shopping day starting.

Xiaomi’s revenue figures are, of course, far lower than those of Alibaba, but they are nonetheless impressive for a company that sold only 19 million smartphones during the whole of 2013.

Singles’ Day came at an ideal time for Xiaomi. It has garnered increased media attention after climbing to third place in the smartphone industry (based on quarterly shipments), and these impressive sales figures will doubtless help its apparent ongoing efforts to raise $1.5 billion in fresh funding to continue to expand its operations worldwide.

A series of new market launches this year mean Xiaomi now sells to customers in seven different countries in Asia — including India — and there are plans to reach more parts of Southeast Asia and to enter Central and Latin America.

The corks were popping over at Xiaomi HQ yesterday… here’s co-founder Bin Lin breaking out the champagne. 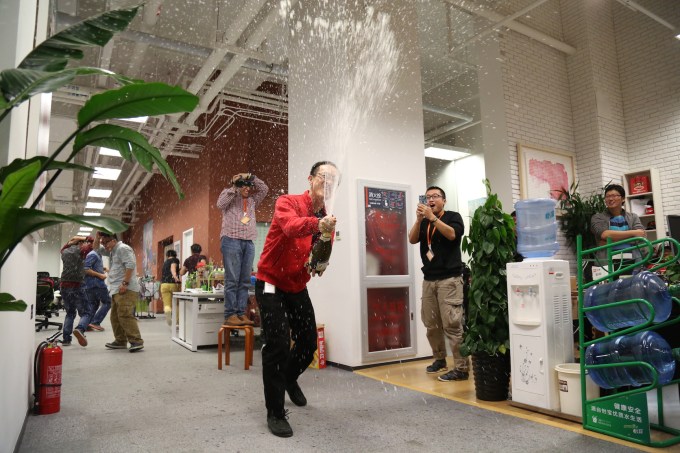 Note: The original version of this article has been updated to include new figures from Xiaomi.