Outside of industry behemoths like Shutterfly, very few photo book makers are able to grow beyond a niche audience. San Francisco-based SimplePrints is hoping to buck that trend, having now grown its iOS photo printing app to a million installs, and hitting a milestone of nearly 100,000 orders and millions in revenue over the past 18 months. Now it’s expanding its service to Android.

A 500 Startups-backed startup, the company originally grew out of another idea centered around preserving photo memories called Storytree. Launched in December 2012, SimplePrints arrived as an iOS application designed to make the process of building a photo book less time-consuming and complex. With the SimplePrints app, what otherwise could have been a lengthy online project gets boiled down to a few steps. You pick some photos, choose a layout for the book and then checkout. 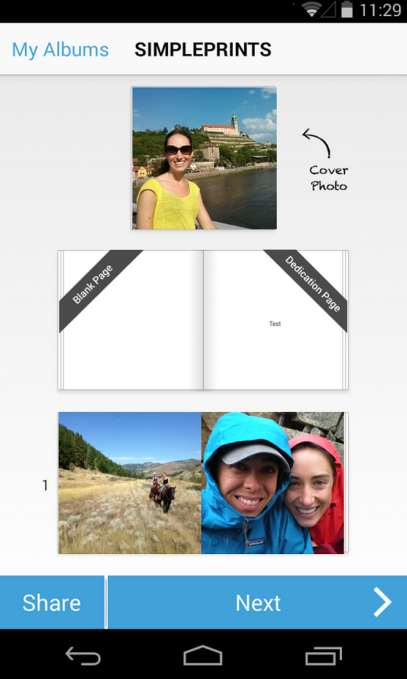 The company sells both 8×8 hardcover and softcover books starting at $14.95, which are printed within 48 hours and shipped internationally within 4 to 7 days. Books orders can be expedited, too, for those last-minute gifts.

The idea is that you can spend a few minutes here and there to complete your photo book in less 30 minutes, instead of having to find an hour (or more) to build a book online at a site like Shutterfly or Snapfish. (Though it should be noted that Shutterfly’s “Photo Story” iPad app is also fairly easy to use.)

“We’ve removed all the distracting features that users get hung up on and created a pretty frictionless experience,” SimplePrints CEO Matt Sullivan says. “At the end of the day, all that most people want is a nice album with their best photos, not 1,000 different colors and fonts to choose from.”

“Our goal at SimplePrints has been to recognize that people want printed products, but that the process of making one needs to be effortless,” he continues. “We also exclusively print photo albums because we want to focus on telling the story behind your photos, versus gimmicky photo mugs, hats, etc.”

Arguably, offering a variety of photo gifts could boost its bottom line, but SimplePrints has stayed lean and narrowly focused on photo books themselves. The company has bootstrapped its way to profitability, and now has 14 employees, and “multi-millions” in revenue. (The CEO didn’t provide an exact number, but you can do the math.)

Now that SimplePrints has arrived on Android, the focus for the company going forward is to improve photo album creation even more by adding automatic recommendations of users’ best photos, improved “blurry” detection and facial recognition features. The goal, however, is not to completely automate the photo book creation process, but to keep rolling out incremental improvements that make selecting and placing the photos ever quicker than before.

On Google Play, the company will continue to compete with a number of other startups and larger companies, including Snapfish and Shutterfly, as well as Mosaic, Kindred, Shark Tank-backed Groovebook, Printic, and a number of no-name others.