Your friends may not be the best photographers, so Instagram today launched a second “People” Explore tab that highlights great Instagrammers and three of their recent pics. Instagram also now lets you edit old captions in case you had a typo or want to be more poetic.

While photos from people you know are inherently the most interesting, YouTube, Vine, Snapchat, and other content platforms have developed vibrant communities of semi-professional creators that sustain loyal fan bases. By highting these creators and helping them build a following, Instagram could piggyback on people’s desire to come back again and again to see the latest shot from their favorite star photographer.

Instagram tells me that the People tab “is personalized.” Accounts are selected to appear based on “a variety of factors, including who you follow, who you’re connected to, and what you like on Instagram. Also, some editorial suggestions.” Everyone won’t be seeing the same accounts, so specific users won’t suddenly rocket to stardom like in the early days of Twitter’s Suggested User List. Instead, Instagram is using algorithms to spread the suggestions around rather than playing favorites.

One issue with People discovery on Instagram is that since you only have one feed, snap-happy creators could drown out friends who only share occasionally. Still, there’s soo much Instagram could do with its Explore tab. If feels like the product is moving at frozen molasses speed. Two years ago I proposed a Nearby tab to show photos taken around you, but that’s still nowhere to be found. 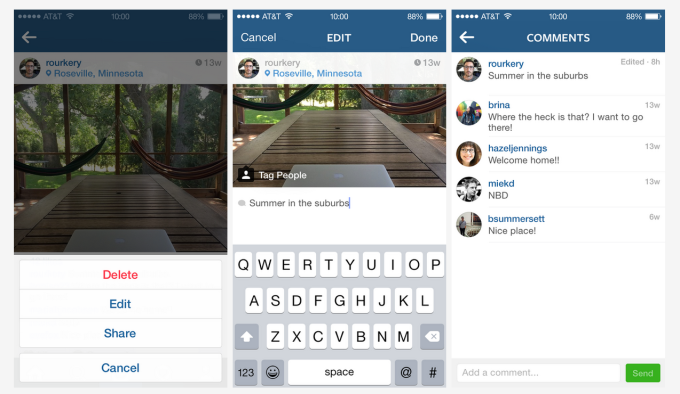 When you tap the Explore icon at the bottom of the screen, now a magnifying glass, you’ll get the same tab of popular photos you’re used to, but you can tap over to see the People tab instead. The caption editing interface is available from the three-dot More button beneath your photos.

For years, Facebook didn’t allow editing of posts because it feared people would bait-and-switch each other, putting up one set of text, then changing it to mean something different that could offend or embarass the people who Liked the old version. Eventually it realized this didn’t actually happen that often, and the community would properly shame anyone who did it, so in late 2013 it began offering post and comment editing. Now Instagram has been deemed mature enough to handle caption editing. What’s different is that you can edit in stealth because unlike Facebook, you can’t tap the “Edited” tag on Instagram to reveal the history of edits someone’s made.

If Instagram can pull off strong recommendations with the People tab, it could mint Instagram celebrities that keep users loyal to their app through a cult of personality. This not only makes the app stickier to existing Instagrammers, but could create instances of mass culture — photos or videos people publicly discuss — that content strictly from friends can’t. That could be the key to the next echelon of Instagram’s ascendance.