Boston-based travel startup Wanderu, which aims to become something of a Kayak.com for booking bus and train tickets — a market that doesn’t yet have a leading aggregation site — has now raised $5.6 million in Series A funding. The round was led by Metamorphic Ventures, and was said to be over-subscribed. Also participating were Alta Ventures, Craig Lentzsch (former Greyhound CEO), 500 Startups, Barbara Corcoran Venture Partners (yep, of “Shark Tank”), John Balen, Brad Feld and other angels.

The service launched into beta in August 2013, following the close of an earlier seed round totaling $2.45 million led by Alta Ventures. At the time, the company had 12 partners, including BoltBus, Go Buses, Concord Coach Lines, and New York Trailways, which allowed it to cover 80 percent of the Northeast U.S. Today, the company has grown to 40 partners, and covers 70 percent of the U.S. It now includes access to the largest ground travel providers, and has since added Greyhound, Megabus, Peter Pan Bus, Grupo Senda and others. 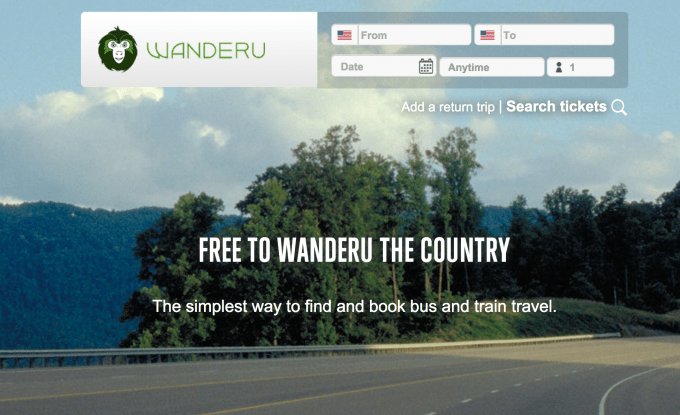 Wanderu users come to the site, enter their starting and end destinations, and the service offers you options on how to get there, taking a cut of the ticket sales booked via its portal. While CEO Polina Raygorodskaya declined to say what that percentage is, she did note that Wanderu passed a million in monthly sales this summer, and has continued to grow. The company is growing at 200 percent quarter-over-quarter in users and 400% quarter-over-quarter in sales since its public debut, she tells TechCrunch.

Today a team of 17, the company plans to use the new capital to expand into Mexico, launch native mobile apps, and expand its coverage and services targeted toward millennials.

Wanderu is especially tapping this younger market, which now accounts for the majority of bus travelers. Around 74 percent of bus travelers are 18-35, the CEO previously told TechCrunch. “It’s becoming much cooler to travel by bus.” Unlike pricey, cramped airplanes, buses have rolled out things that appeal to millennial travelers. For example, they started offering plugs and Wi-Fi before planes and trains did.

“More than 80 percent of our users are under the age of 45 and we have seen incredible return rates,”Raygorodskaya says. “What’s most exciting is that we’ve seen our conversion rate double over the past 4 months, driven by strong return and repeat user rates, and our push to rapidly roll out new coverage and features that users are asking for.”

In addition to bus tickets, Wanderu offers bus, train and city travel guides on its site, plus details of routes and more. The company, which competes with Busbud and GotoBus, plans to build its own brand going forward, rather than license its data to others. That data, however, is valuable. Because many in the bus industry didn’t have their own APIs, Wanderu had to partner with companies in order to gain access to their data and then build their system from scratch.

The timing of the service feels right, as the millennial generation establishes its footing and spends its income. This demographic group is fleeing suburbia and leading the return to the cities and urban centers, where they’re less likely to own a car (or a home for that matter) and are delaying parenthood, giving them more time to travel.