The eNcade hopes to capitalize on your misplaced nostalgia. Essentially a Raspberry Pi inside a cute case, the portable console promises to add online multi-player to classic games, thereby allowing you to Joust with players around the world or Mario Brothers your friends across town.

The console is 3D printed and contains a fully assembled Pi with arcade inputs. Anyone can build one of these, obviously (I’m building this one right now with my kids) but the real secret sauce is in the software. “The eNcade started off as a concept of mine, initially as a portable online multiplayer capable retro console,” said Nicolas Wicker, creator. “However after analyzing the community I felt that the Raspberry pi could complement the product greatly for being popular in our demographic and capable of our application. From then on we have gone through three design/prototype revisions and we are currently working on finishing the beta release of our software.”

“I conceived the eNcade first when i realized that there wasn’t any portable solution to playing retro games online with multiplayer in a user friendly environment, which was thought over a year ago. Also I noticed the void of a purchasable fully assembled portable Raspberry Pi gaming console. The eNcade was the perfect solution in bringing these two concepts together.”

A fully-assembled kit can be had for $160 and Wicker he would be 3D printing the initial models and will then ship injection-molded units if the project takes off. His goal is to create a sort of Xbox Live for old ROMs, allowing you to invite other encode users to join you in games remotely. 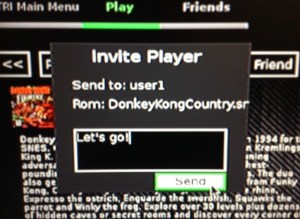 He is looking for $6,500 and has a ways to go, but it could be an interesting project if it takes off.