Longtime social site for groups Meetup has been steadily rolling out new features to its service over the course of the year following the close of a secondary round earlier in 2014. This summer, the company made messaging the big focus of its mobile application, and now Meetup is rolling out its own crowdfunding platform called “Contributions.” The new feature allows Meetup group members to fund various projects managed by group organizers in order to pay for things the group needs – like meeting space, supplies, equipment, drinks and snacks and more.

At launch, Contributions will be available on iOS, Android and web.

Meetup tells us the feature has been in beta testing for several months with 1,000 groups on its service. Next Wednesday, November 12, Contributions will go live for the majority of U.S.-based groups, the company says, with plans for international support arriving in the future. Organizers can choose to deactivate the feature on the groups they manage, however, if it’s not something they need.

Though many people associate with “crowdfunding” with larger platforms like Kickstater designed to get ideas, and often, hardware, into production, Meetup’s implementation of crowdfunding, which is powered by Wepay, is more about group members pooling their money in a more accountable way.

Organizers can turn on or off the setting under “Group Tools,” where they can also opt to send a message to their members that includes the group’s Contributions page. Here, members are prompted to “Chip In” to help fund the community and buttons for standard amounts are provided, or members can enter their own.

In groups that don’t charge Member Dues, members can reach the Contributions page by clicking “Chip In” option which will appear on the group’s homepage.

Asking for optional contributions may actually be a more viable way to build a sustainable group, since even small fees can turn off potential participants who would rather first test the waters by attending a few events before forking over an annual membership fee. Plus, it could allow for a fairer system as there will be those members who only attend a handful of events per year and others who go to each meeting – they shouldn’t necessarily be paying the same fees.

The new feature gives Meetup another way to grow its revenues, too, as the company says it takes a “small transaction fee” from Contributions to keep Meetup ad-free. We understand that Meetup takes 4.5% for itself and 3.0% plus $0.50 for its payment processor. 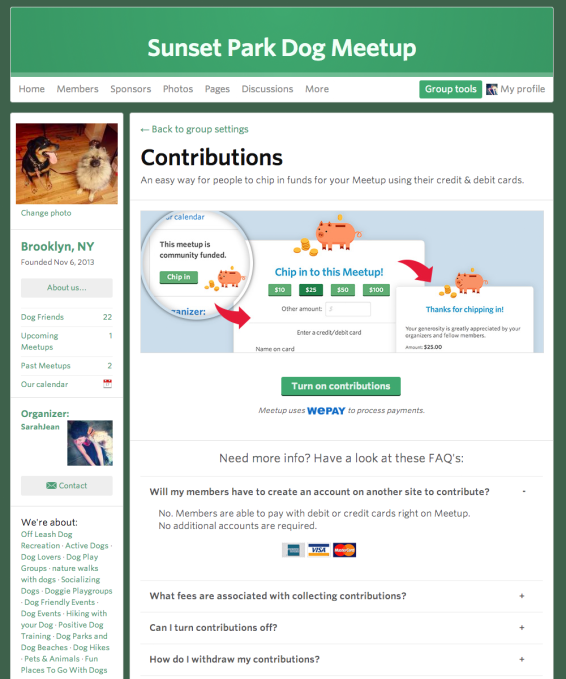 If Meetup could grow its revenues significantly through these crowdfunding campaigns, perhaps it could introduce a free tier to its pricing plans to keep smaller groups engaged with the company. Today, Meetup competes heavily with Facebook, which, through its own groups product, has shifted a lot of group-related activity away from Meetup – especially less formal groups who only meet occasionally. Though Meetup’s feature set is robust, Facebook works well enough for many. And “good enough” and “free” often win.