While the world continues to muse over the dramas unfolding at Samsung following a slowdown that saw profits drop 60% year-on-year — TechCrunch’s own John Bigg’s take is worth your time — the Korean smartphone giant is increasing its focus on China, the world’s largest smartphone market where it has lost ground on competitors over the past year.

Before we get to the details, it’s worth noting that it’s difficult to pin Samsung’s recent stuttering down to a particular reason or two. Some industry watchers say the firm’s problems have been inevitable — Statechery blogger Ben Thompson makes that argument best — but the rise of Xiaomi, which ranked a highest-ever third on smartphone shipments in Q3 2014, has undoubtedly cut into the Korean company’s sales.

Xiaomi is on course to hit its target of 60 million shipments this year, and executives are aiming to raise that to 100 million in 2015. The company is no-longer a China-only retailer and it doesn’t break down its sales figures by market, but we can assume that most of the devices it sells this year will be in the hands of consumers on Mainland China, such is its reputation (some might even say cult) and its logistics on home turf.

China is a huge market, as you’d expect with more than 1.3 billion people living there. Though smartphone shipments declined for the first time in over two years earlier this year, the fact that over 90 million devices are shipped each quarter means that losing even just a couple of percent of the market can impact a company significantly.

Samsung’s turn of fortune comes at the exact time that Xiaomi is on the up. That’s more than just a coincidence since Xiaomi’s devices — which retail at around $150 and $300 — don’t compete directly with the iPhone, instead they rival middle-of-the-range and affordable products. Samsung has long been the market leader in China thanks to its array of devices for any budget, so it stands to reason that it is the one suffering the most from Xiaomi’s rise.

Indeed, an August report suggested that Xiaomi now ships more phones in China than Samsung, as of the midpoint of 2014. One year prior, Samsung’s figure was three times higher than Xiaomi’s.

Beating the iPhone 6 to market

So China is massively important to Samsung, and the company has demonstrated that with a series of strategic moves over the past month or so.

The Korean firm uncharacteristically rushed the launch of the Galaxy Note 4 in China when it abruptly dual-released the flagship 5.7-inch phone in Korea and China in September. That was unusual for Samsung, which typically debuts major phones in Korea first and exclusively — in this case, it seems the move was entirely pragmatic.

Due to delayed regulatory approvals, Apple was unable to include China in the first tier of markets where it sold the iPhone 6, and Samsung used that hold-up and pushed its own schedule forward to beat the device to Chinese soil. Stealing a march on Apple doesn’t seem to have affected its US rival much — the iPhone reportedly got 20 million pre-orders in China — but it sure is a sign of Samsung’s renewed ambition in China.

A different approach to mid-range phones

Apple isn’t the only target. Last week, Samsung unveiled a pair of very Apple-looking phones, which it claimed are the thinnest devices it has ever produced.

The Galaxy A3 and Galaxy A5 both sport metallic bodies, eschewing the usual faux-leather plastic and other somewhat cheap-looking assembly materials of devices past, and — most notably — they are being launched in China first. 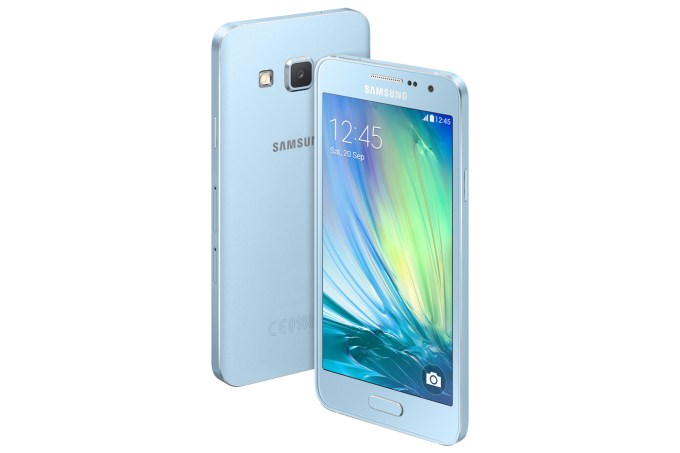 The descriptions that the company used show that they are firmly targeted at the kind of young, fashion-conscious consumers that Xiaomi has been so successful reaching:

Samsung Electronics unveiled the Galaxy A5 and Galaxy A3, offering a refined, trendy design and the most advanced functions to support social networking. Available in a variety of colors and sizes, both devices empower younger consumers to quickly and easily capture meaningful moments, connect to social media and share their daily lives.

Fast-forward to today and Samsung just announced its first “Galaxy Lifestyle Store” in Beijing. This particular is move is — as the name suggests — aimed at adding some pizazz to its presence in China. 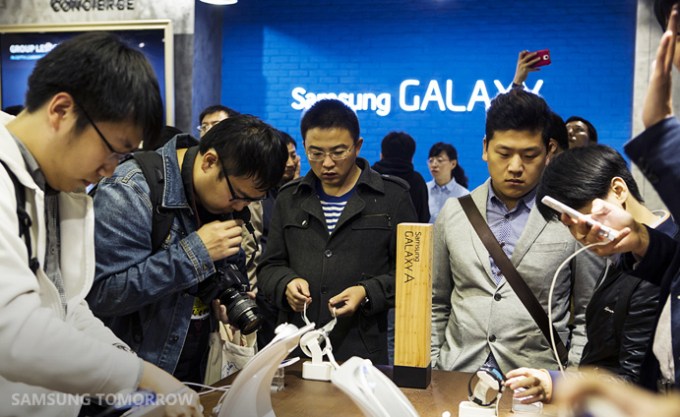 The Samsung Galaxy Lifestyle store is located in the cultural hub of Beijing, offering unique activities and personalized experiences for customers. We wanted to create a playground that expands the way consumers think about their mobile lives, so this Lifestyle Store is not just a retail store but a place to hang out, meet new friends and access exclusive content, together.

The store is billed as an “exclusive” for China, where Samsung no doubt hopes it will be able to push an image as a high-end, aspiration brand, much in the way Apple is viewed in China.

It’s not news to say that Samsung is competing with the top products in the market, taking on scrappy competitors, and positioning itself as aspirational — these are ongoing targets for all companies — but the way it prioritized doing this in China is interesting.

Does it suggest that Samsung has singled out China as a key market where it is struggling and needs to turn things around, or is this more of a sign that it sees the growth potential in this huge country? Either way, we can expect more China-centric plays as the company seeks to lift itself from its present doldrums.