Spotify may be smarting from the removal of Taylor Swift’s music catalogue from its platform, and Taylor Swift may not care, since she is riding a sales blockbuster in the form of her new album 1989, but it turns out that in the bigger picture, Spotify’s streaming service continues to gain an edge over downloads, specifically via iTunes.

Kobalt, a company that helps collect music royalties on behalf of thousands of artists — including “half of this week’s Billboard Top 10” and musicians like Maroon 5, Lenny Kravitz, Dave Grohl, Max Martin, Bob Dylan, and Macklemore & Ryan Lewis — says that in the last quarter in Europe, revenues from Spotify streams were 13% higher on average than revenues from Apple’s iTunes for its customers.

The numbers support findings reported in the Wall Street Journal last month noting that iTunes music sales are down about 13% this year. iTunes is still a massive business — up $300 million to $4.6 billion in sales in the last quarter — but that doesn’t point to how well music is doing within that. 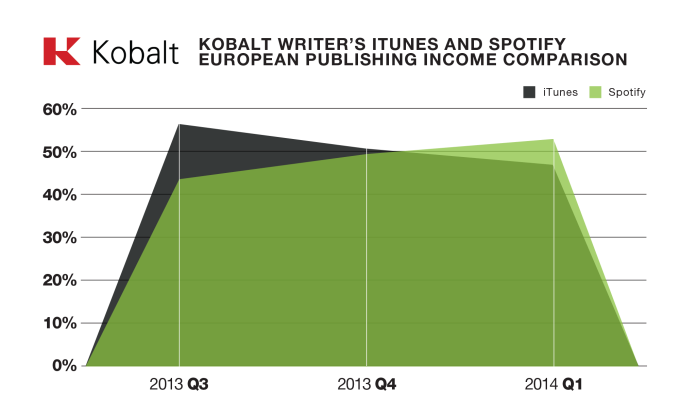 (We pointed out earlier this year in our profile of Kobalt when it raised $140 million in funding, the company collects earnings from Spotify streams in Europe only, but apparently this has evolved to cover global revenues but the streaming traffic on Spotify is only overtaking iTunes in Euorpe at the moment, hence focusing on revenues from this region.)

Kobalt also notes that streaming services as of Q2 2014 account for 10% of all publishing income for its clients in Europe. 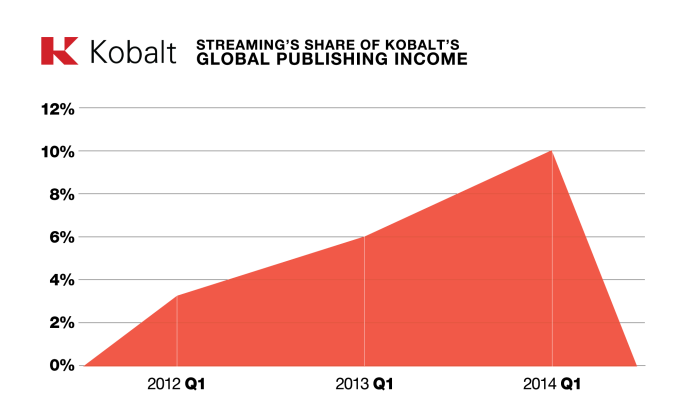 The tip of the balance to streaming services is a relatively recent phenomenon, Kobalt notes.

In Q3 2013, iTunes’ earnings were 32% higher than that of Spotify in Europe. In the last two years, streaming revenues tripled. Kobalt says it counts publishing income as returns from music plays on subscription services, YouTube, Internet radio and royalties from live performances of compositions, radio performance and those from CDs and concert DVDs.

The decline in iTunes sales points to a bigger shift away from downloads in favor of streaming, and it is one more illustration of why Apple may have been interested in buying Beats Music and is now working on integrating some part of that streaming service into the wider iTunes experience. It hopes to provides an attractive streaming service to keep users tied into its device and wider mobile ecosystem.

But although streaming revenues appear to be growing, there is also money being left on the table.

“Spotify overtaking iTunes in Europe is an important new milestone in streaming,” Kobalt CEO Willart Ahdritz says. “The music industry’s infrastructure is failing them, unable to efficiently account for the enormous volumes of data from digital transactions.” That, of course, is slowly but surely getting snapped up, as today’s deal between SoundCloud and Warner Music demonstrates.