Amazon Prime members are getting another benefit today, the company announced this morning: free, unlimited photo storage. In a new service called Prime Photos, paying subscribers of Amazon’s membership program will now be about to store photos in their original resolutions to Amazon Cloud Drive from any device, including iOS, Android, and Fire phones and tablets, as well as Mac and Windows PCs.

These photos can then be viewed on those devices, as well as on the big screen via Amazon Fire TV, the new Fire TV Stick, game consoles like the PlayStation 3 and PlayStation 4, and some models of LG and Samsung smart TVs.

To get started with Prime Photos, Amazon Prime subscribers can now visit the homepage for the new service (at www.amazon.com/primephotos) in order to download the Cloud Drive Photos iOS or Android application, if they didn’t already have it installed, or get the Cloud Drive Windows upload app. (The Mac version is in the works, the website tells visitors. In the meantime, Mac desktop users can sign in from the web browser or use the mobile application of their choice).

The app, which was previously available but with limits on free storage for photos before pricing kicked in, lets users view photos in a timeline format, auto-save photos as they’re taken, and share their photos through Facebook, email, and other apps. 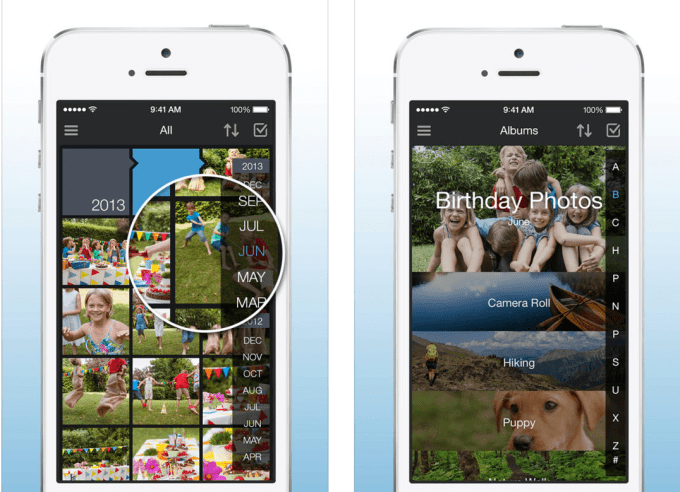 Of course, for the handful of Amazon customers who ordered the Fire phone, the Amazon Cloud Drive-powered photo storage option is already built-in. In fact, it was one of the original selling points for Amazon’s entry into the smartphone market. On Fire phones and tablets, customers won’t need to download an app – they can access their Cloud Drive images from the Photos section on their devices.

No Price Increase For Prime

Amazon says the additional benefit won’t impact the cost of Amazon Prime membership, which is now at $99, renewed annually – a price increase announced earlier this year which some speculated would cause members to drop the service. That turned out to not be the case. Though Amazon’s earnings were gloomy with a larger-than-expected loss and a huge write-off for the Fire Phone, Prime membership seemed to be one bright spot.

Amazon CFO Tom Szkutak said the service had seen “great retention” since the price increase, and said “the program is growing very fast.” Amazon doesn’t reveal its membership numbers beyond saying “tens of millions,” but some analysts have estimated Prime subscribers at 50 million. In addition to Prime Photos, members have access to free two-day shipping on over 20 million items, tens of thousands of streaming titles on Prime Instant Video, 1 million songs and hundreds of playlists on Prime Music, over 600,000 books to borrow in the Kindle Owners’ Lending Library, and early access to select Lightning Deals.

Non-Prime and Prime subscribers will continue to receive 5 GB of free storage on Amazon Cloud Drive which is the equivalent to up to 2,000 photos, the company tells TechCrunch. The Cloud Drive service, which is built on Amazon Web Services, also lets customers store music, videos, and documents. But only paying subscribers will be able to access the unlimited storage option – Amazon will not make that same tier available to non-Prime members, even for a fee.

Amazon is not the first technology company to offer a massive photo storage plan for their customers – Google, Facebook, Yahoo’s Flickr and Apple do the same, but there tend to be restrictions. In Google’s case, users can upload an unlimited number of standard size photos, but full-size photos will count against their Google Drive storage quotas. Facebook offers unlimited photo storage, but limits albums to 1,000 photos and defaults to lower resolution photos unless you tell it otherwise. Flickr offers 1 TB of free storage (pretty close to feeling like “unlimited”) but includes file and upload limits. And Apple’s largest plan – 1 TB – is pricey.

Amazon says Prime Photos will not have any file or upload limits. Customers can upload photos from any device, in their original file size. But Amazon’s problem is that unlike companies like Apple and Google, it has very few smartphone customers of its own, so is at the mercy of app store dynamics in terms of getting its mobile app in the hands of new users. And unlike Flickr and Facebook, it’s not considered a “social” company where photo-sharing is the norm.

That said, the service does leverage two of Amazon’s biggest draws – its investment in web services and its popular subscription service. Now that it has the infrastructure to make unlimited photo storage a commodity, the major players will have to compete on feature set. Here, Google is potentially in the lead with its automatic photo editing technology that turns photo series into animated GIF-like images, creates stories and more. Over time, it’s features like this, combined with smart search technology that will make a photo storage service stand out. After all, what good is unlimited storage if you can’t find or enjoy your favorite photos?