Arrr! Here be space pirates and where there are space pirates there is need of a $230,000 mechanical watch. Wild watch makers MB&F have just announced their MB&F HM6, a watch based on a 1970s cartoon called Capitaine Flam (Captain Flame). The bulbous watch is built of titanium alloy and you can tell the time using the little curved bulbs on one end of the piece. You can see more photos here.

What the heck is going on here and why is this important? Well, in terms of materials science this is pretty cutting edge stuff. To create a working watch in this shape and size, using curved metal and carefully curved sapphire crystal, is a feat in itself and could point to future design cues in consumer electronics. The biomorphic design looks like something laid eggs on your wrist and is a huge departure from MB&F’s previous spaceship-themed watches. The central tourbillion – the little bit in the center that spins – can be hidden with an eyelid-like cover and the watch winds itself automatically. 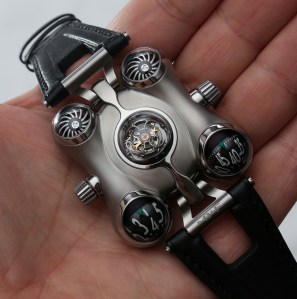 Thanks to devices like the Apple Watch, watch design is a hot topic these days and the tools and techniques used to create high-end watches like this one will soon trickle down into cheaper watches. While this object is made by hand – hence the price – a mass produced curved crystal isn’t impossible and titanium bodies are already popular in phones and computers. While MB&F might not like it, we can expect to see this design language in wearables as we move away from blocky and bulky to more organic systems. Duplication, as they say, is the sincerest form of flattery.