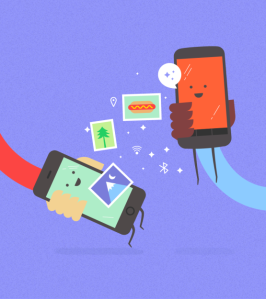 Google has a new service in the works that could allow users of Android devices to share media with others nearby, even if those users are rocking iOS devices like iPhone and iPads instead of gadgets running Google’s mobile OS. The so-called Copresence feature, revealed by an Android Police source digging around in the latest Google Play Services APK, would allow devices to use location information or Bluetooth to authenticate based on proximity, without requiring contact list approval as does Android Beam.

The Copresence feature would then share information using either Wi-Fi or Wi-Fi direct to actually shunt info back and forth, and would enable the sharing of maps, music, photos, websites and more, and would likely sport a strong integration with its Hangouts chat application, based on the graphics uncovered in the Services APK. It would make a lot of sense to see this housed in the Hangouts app itself, too, but there’s also an API for Chrome that’s been revealed previously, and Google has a broad patent, so this, like the Cast function for Chromecast, could be something that we see made available to developers to include in their own software on an app-by-app basis.

Apple’s AirDrop on iOS allows for sharing between iOS devices that are near one another, across networks and with the option of sharing beyond your address book, but it doesn’t allow for sharing between ecosystems. The iOS 8 update and Yosemite mean that it can now shuttle things between mobile and desktop, but you still have to be an Apple device user to partake. Google’s Copresence feature would apparently go beyond that limitation, in the same way that its Chromecast abilities extend to the iOS ecosystem, while AirPlay remains an Apple-only affair.

According to Android Police, Google Copresence will debut sometime in “the coming weeks,” so hopefully we don’t have to wait long to get our hands on what looks like a very useful feature. With the release of Google’s next-gen mobile OS Android 5.0 Lollipop just around the corner, it sounds like a good time for Copresence to make its debut.