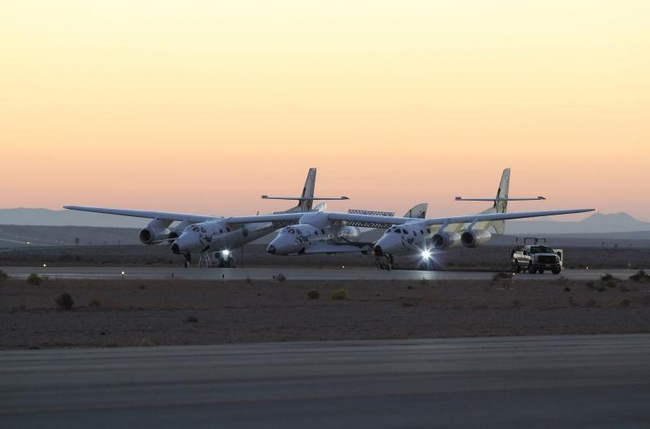 This morning, Virgin Galactic tweeted that their SpaceShipTwo spaceplane had experienced an “in-flight anomaly”

We have now confirmed that SpaceShipTwo has crashed during a test flight due to currently unknown causes. A press conference is planned with more details at 2 pm pacific.

SpaceShipTwo was designed primarily for space tourism, meant to carry passengers high enough to experience near-weightlessness for roughly $200,000 per ticket. This was a test flight, however, so no passengers are believed to have been onboard.

Update: VirginGalactic confirms the loss of SpaceShipTwo. See timeline below.

WhiteKnightTwo, the jet-powered craft that carries SpaceShipTwo to altitude before detaching, landed safely. At an altitude of roughly 50,000 feet, WhiteKniteTwo releases SpaceShipTwo to fly on its own by rocket power. WK2 had released SpaceShipTwo for free flight roughly 6 minutes before the crash.

There were at least two pilots on board SpaceShipTwo before the crash; their status is unknown. We will update as soon as we hear more.

Update: The California Highway Patrol is telling news outlets that 1 pilot has died, with the other seriously injured.

#SpaceShipTwo has been released by WhiteKnightTwo, and is now flying freely for the 35th time.

During the test, the vehicle suffered a serious anomaly resulting in the loss of SpaceShipTwo. WK2 landed safely. (2 of 4)

Our first concern is the status of the pilots, which is unknown at this time. (3 of 4)

We will work closely with relevant authorities to determine the cause of this accident and provide updates ASAP. (4 of 4)