The promise of the cloud, whether private or public, has always been the potential to bill users or lines of business for specific usage, but it’s proven difficult to do in practice. Today, Cloudyn introduced a new tool called Cost Allocation 360° that attempts bring some clarity to cloud billing, whether it’s in the data center or the public cloud.

Cloudyn CEO Sharon Wagner says the goal of the tool is to give CFOs the ability to allocate costs to the business units using the resources. He said the tool is also aimed at Software as a Service vendors to allocate costs more fairly based on usage. The idea is to provide a way using your company terminology to apply costs in a way that makes sense to your organization.

He says the problem today is that if you are using a service such as Amazon S3, you are billed for usage based on who is paying for it, not who within your organization is actually using it, because as he explained, Amazon doesn’t understand the concept of a business unit. So if you have several departments and one is storing documents and one is storing video, if you are billing back to the department or project based on usage, the cost should theoretically be higher for the video department. Unfortunately, it hasn’t worked that way until now, at least not without significant effort from the finance department to figure out who owes what. 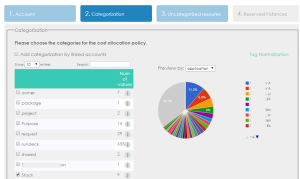 It does this by providing a way for companies to build a model using business rules to define usage and then charging back to those who are using the resources in a fair way. The tool actually walks the user through the model building process starting with the accounts you are tracking, the tags the tool can pull automatically, uncategorized resources and the reserved instances associated with this account. It’s important to note, it can pull costs associated with different resources from the cloud vendor APIs, but customers building a model that includes internal resources in a private cloud have to come up with a cost allocation system for charging back to departments for usage manually.

Wagner admits that this could be challenging for some organizations trying to figure out how to charge for these resources. “It’s not an easy process to determine the cost of the service in OpenStack. It involves various factors, like how cooling and floor space and DBA hours related to an instance is related to cost. We don’t know how to predict all the different configurations customers are having,” he said. But he explained once the customer figures this out, the tool allows them to define any units they want in terms of pricing.

The system has an automated mode and a manual mode for tagging because there are going to things that the system simply doesn’t know what to do with, but as you specify how to allocate different resources, it remembers so you don’t have to deal with the manual bits every single time, or at least they should become less over time.

For today’s release, the tool works with public cloud vendors Amazon Web Services and Google Cloud. For private cloud, it works with OpenStack. They hope to fold in Azure and VMware in the future.