GoPro’s earnings for the third quarter were pretty as a picture for the company’s investors, with earnings coming in above analysts’ expectations

Analysts had predicted revenue of $265.6 million and earnings of 8 cents per share.

On a non-GAAP basis, GoPro earned $0.12 per share, putting its normally accounted for profit, and its adjusted profit in reasonable harmony. Companies like Twitter that have higher share-based compensation costs have larger negative deltas between their GAAP and non-GAAP profit margins.

The company, which has seen its stock price tumble from the peaks it reached in the first months after its public offering, was buoyed by a strong showing for its new line of cameras, which the company called the most successful launch in its history.

Shares were up over $5 or more than 7 percent in after-hours trading on the Nasdaq, as investors responded favorably to all the good news. 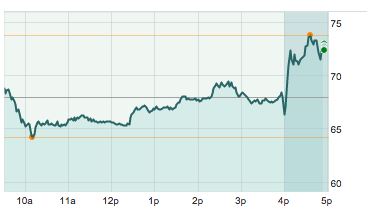 “The global scale and execution of our HERO4 launch made this the most successful roll out in GoPro’s history,” said GoPro founder and chief executive, Nicholas Woodman., who also touted advancements in the company’s desktop and mobile content management applications aimed at making it easier for GoPro owners to create and share content.

With the earnings, GoPro is sitting fairly pretty as it heads into the holiday season. As part of the bigger muscles the strong public offering afforded the company, Best Buy customers around the country can expect to see more of an in-store presence from the camera maker.

GoPro went public for $24 per share. It closed regular trading at $68.25, and is up past $72 in after-hours trading. Nascent media business or not, investors are happy with what they see. The company is worth around $9 billion.