Reddit is continuing to expand its presence beyond its wildly popular sharing site — known as the front page of the internet for many — after it jumped into the world of crowdfunding with Redditmade, a service that allows moderators to set up projects which can be backed by Redditors.

The move comes at an interesting time for the cult website. Reddit raised a whopping $50 million at a $500 million valuation last month and is making bold moves to be more than just a community of information. CEO Yishan Wong has plans to introduce a virtual currency for the service — which he said is close to becoming profitable — and that’s something that could fit nicely with Redditmade as it looks to amp up its revenues.

Even without that link, Reddit racks up over five billion monthly page views and 115 million unique visitors each month, which makes its jump into crowdfunding a significant one.

“Redditmade is a new place to turn the best designs and products by the community into reality,” according to the launch post — which is on Reddit, of course. “Redditmade gives you the flexibility to create almost anything you want, easily raise money, and support causes you care about. It’s also a great way for others to find awesome new products they’ll love and support other redditors while knowing their information and money will always be secure.”

As with many things Reddit, there’s a charitable edge to Redditmade. Moderators can opt to donate the profits from their campaign to charity — that means that if a project is over-funded, a good home is found for the additional cash raised.

That’s the case for this Reddit Secret Santa Sticker Pack, which caught my eye. If and when the project’s pledges surpass 100 sticker packs, any subsequent sales will be added to the company’s charity fund — which includes 10 percent of annual ad revenue and will be given to the top-voted non-profit according to Reddit members come the end of this year.

As you can see from the secret Santa sticker page, the site unsurprisingly borrows cues from established crowdsourcing sites Kickstarter and Indiegogo. Redditmade Projects must raise their stipulated goal within a 30 day period and there’s space for comments and feedback below. 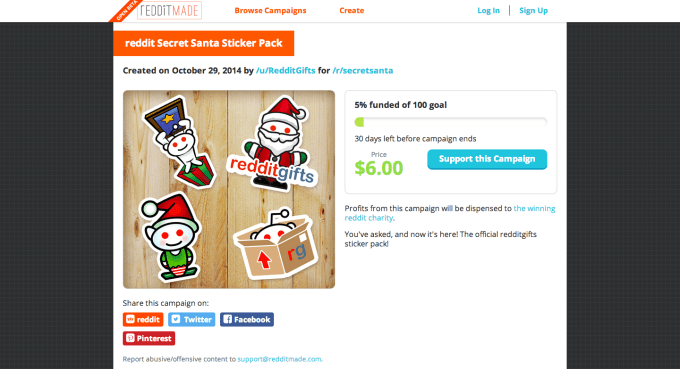 Redditmade is designed to give moderators of subreddits “an easy way to create official subreddit merch for their communities”. To that end, official subreddit projects are set aside and spotlighted as feature campaigns and, the company explains, they may be eligible for free ads within their subreddit to help raise awareness of them. Reddit says that promotion is dependent on ad space being available — obviously that could be a very effective way to raise necessary funds for a project, and potentially help charitable causes in the same breath.

Regular folks can also create projects for subreddits. If they do, Reddit will mail the moderator responsible to ask if they want to make it an official campaign for the subreddit.