Spare a thought for Microsoft, a relative newcomer to the mobile making business, after Redmond completed its $7.2BN+ acquisition of former European mobile making powerhouse Nokia earlier this year. If Microsoft was hoping to see quick marketshare wins in Europe once its hands were fully on the levers of production that has not come to pass.

The latest 12-week smartphone sales figures from Kantar Worldpanel ComTech, up to this September, indicate that Windows Phone’s already small share of the smartphone market has shrunk in Europe — dropping 0.3 percentage points in aggregate across the top five markets in Europe (the UK, France, Spain, Italy and Germany).

Breaking those markets out individually, only Italy continues to see marketshare gains for Windows Phone, with a 1.5 percentage point rise on the year ago period in that market — giving Microsoft’s OS a 15.2 per cent share on smartphone sales in the country (where it is second only to Android’s 71.8 per cent).

But Italy remains the outlier for Windows Phone. The other four major European economies recorded small declines, with Germany shedding the largest share: a drop of 1.4 percentage points to leave Windows Phone with 7.1 per cent of the smartphone sales market. 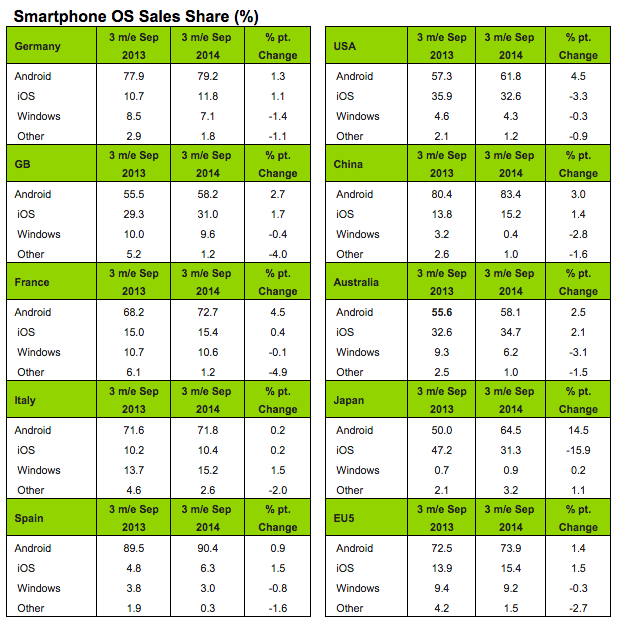 The three months to September included the release of Apple’s new iPhones, the iPhone 6 and 6+, in certain markets. Kantar’s figures record a bump in iOS marketshare in several European countries where the device went on sale over this period, including the UK (where iOS was up 1.7 percentage points year on year) and Germany (up 1.1 percentage points).

Android of course remains the dominant mobile OS, with a 73.9 per cent share of smartphones sales across the five major European economies in the three months to September, followed by Apple’s iOS with 15.4 per cent.

Android’s overall share of the Chinese market was up 3 percentage points to 83.4 per cent, while iOS was up 1.4 per cent, to take a 15.2 per cent share.

Kantar also noted that around 16% of smartphones sold in China over the past three months had a screen size of 5.5 inches or larger – aka the phablet category — which it described as a “positive indicator” for Apple’s large screen iPhone 6+, when that device arrives in the market.