Days after Facebook revealed that WhatsApp, its $18 billion messaging app acquisition, posted an overall loss for the first half of this year, Line — a rival app with 500 million registered users — has announced that its revenue doubled year-on-year during Q3 2014.

Line, which does not reveal its overall profit/loss figures, says it made $192 million (20.9 billion yen) in the most recent quarter. That figure is 104.2% higher than a year previous, and represents a 17.7% increase in its previous quarter. Line makes its money as a digital content platform — most of its revenue comes from in-app purchases within its connected games platform, which includes more than 50 titles, but it also sells stickers and operates a marketing channel which lets brands run official accounts and pay to reach consumers. 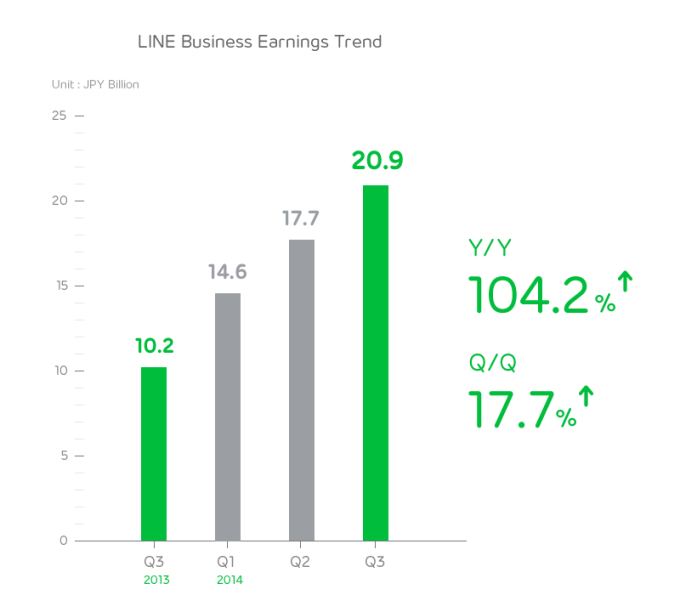 The company says it has 170 million monthly active users — more than half of which (87 million) come from its top three markets Japan, Thailand and Taiwan, such is the networked nature of messaging apps. Outside of those markets, Line says that it now has over 10 million registered users in 11 markets worldwide: that includes 25 million in the US and 30 million in India.

Line, which recently postponed plans to go public in a rumored dual US-Japan IPO that could value it at $10 billion, says it is planning to push its own Manga service worldwide to help increase downloads and engagement worldwide. It is also looking to work with more brands to promote online-to-offline customer engagement, a move it hopes will help raise its profile in the West and other markets.

WhatsApp is far-and-away the top dog in the messaging space, with more than 600 million active users each month, but Line and other Asian rivals like WeChat in China and Kakao Talk in Korea are interesting because they are pioneering platform-based business models that generate significant revenue.

In Line’s case, however, its business is likely to be some way from actually turning in profit since it is running promotion campaigns in a number of overseas markets, which include expensive TV ad spots. As a first mover, WhatsApp was able to leverage word-of-mouth effectively, but as Facebook considers how it might make money in the future, the examples from Asia are worth studying — even though WhatsApp’s founders have repeatedly spoken out against including ads and games in their service.