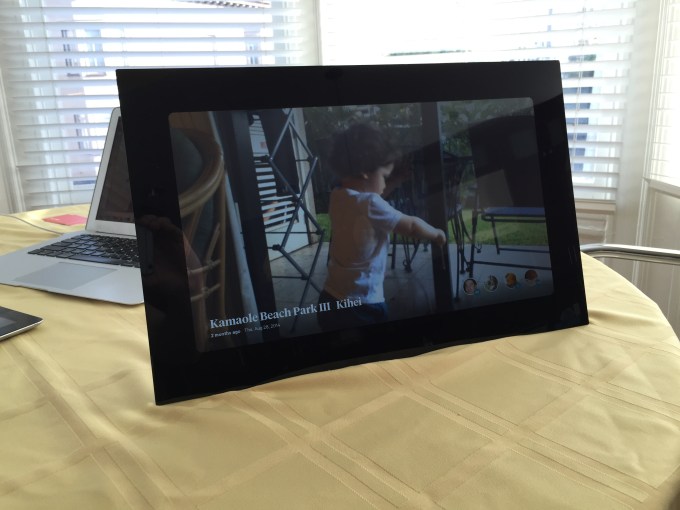 With Apple, Microsoft, Google, and third-party cloud services making it easier than ever to back up your precious family photos and videos, most smartphone users assume that their memories are safe (though maybe not very secure, as of late) *somewhere.*

Now, most families have thousands of photos in the cloud, just kind of sitting there. You might occasionally go find a few to post to Facebook or Instagram, but for the most part photos remain in iCloud or Dropbox, untouched. About two years ago, Fireside founder Andy Jagoe noticed that he and his wife were taking hundreds of photos of their child every few months, but only a very small portion were printed and framed or put up on social media.

Rather than let moments slip from memory to the cold bits of the cloud, Jagoe set out to redesign the digital picture frame. While the concept itself seemed sound — we’ve liked showing pictures of ourselves and our families on the walls of our homes since pre-historic times — the low-res LCD displays and SD card-based photo transfers don’t have very wide appeal when everyone’s phone has a “Retina”-like pixel density screen and the previously mentioned access to cloud services.

The Fireside SmartFrame is the startup’s solution for dragging memories out of the cloud and into our homes. It’s a 15-inch, 1080p IPS display driven by the same system-on-a-chip as a low- to mid-range Android phone. Once plugged in and connected to the cloud using Fireside’s upcoming iOS app, the frame downloads photos and videos uploaded to Fireside from family member’s iPhones and iPads to 64 GB of onboard flash memory.

Instead of showing random photos from a family’s library, Fireside tries to show memories based on family events, holidays, and the weather. If users choose to enter their birthdays, photos from years past will show up, inspiring “look how much he’s grown!” moments for the adults attending obligatory kids birthday parties. Similarly, image recognition algorithms will brign up photos taken in the snow on a cold day and beach days when it’s warm and sunny. On the frame, photos are overlaid with the location where they were taken and (optionally) the age of everyone in the photo.

The frame itself is pretty, both in terms of its body’s design and display’s quality. Jagoe showed me the SmartFrame in a sunny living room with light streaming in at less-than-optimal angles. Head on, photos look great, though in the bright room you couldn’t see images very well from the same angles as you could an iPad. Up close, the fact that the display isn’t Retina quality is quite clear, as you can certainly see pixels. But this isn’t actually a tablet, so you’re not really supposed to interact with it from two feet away, but to occasionally see it from across the room, according to Jagoe. I’ll accept that, except for the fact that the information on the display along with photos and videos — location and ages — is actually compelling enough that you want to get close to read it. There’s a trade-off between making that information readable and not taking up too much of the screen.

Where the SmartFrame really shines is video. The screen plays 10 seconds of footage before moving on to other photos and videos, giving you just more than what you’d get while scrolling through a series of posts on Vine. I found that these video segments drew me in and made me want to talk about what was happening in each clip, even with very little context. If there’s a downside, it’s that they’ll spark conversation but you can’t force the video to keep playing by interacting with the frame somehow.

At $400 on Kickstarter, the Fireside SmartFrame isn’t cheap and won’t be available to consumers until the middle of 2015. I do think that some people value their memories enough to pay up — think about how much we all used to spend to develop photos from film, knowing how many of them wouldn’t turn out well — and the included year of Fireside cloud storage for photos and videos (which will normally go for $7.99 a month) is a nice bonus.