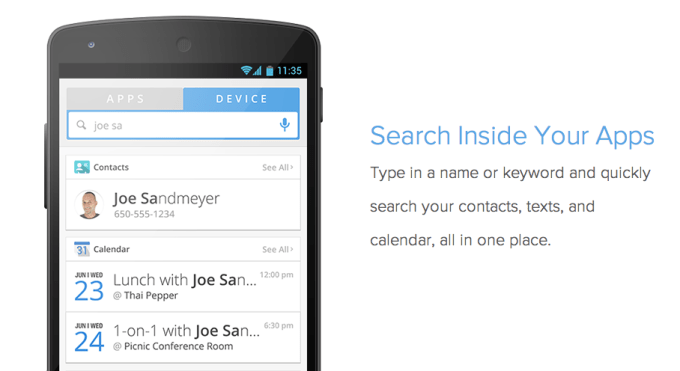 On stage for the first panel of the day at Recode’s Code/Mobile conference, Quixey CEO Tomer Kagan pushed back against a point raised by a member of the audience: many app developers haven’t implemented “deep links,” so how are you going to make an effective search engine for apps?

Despite also talking up his company’s deep-linking standard (and in a post-panel chat, tools for developers slated to arrive next year), Kagan claims that in the long run, Quixey doesn’t need support from developers to make a search engine for mobile apps that can find all of the information in a native app that you’d be able to get from a website using a traditional search engine like Google. He thinks that Quixey will be able to crawl every native app on Android and iOS to find every single state and automatically make them into searchable pieces of data.

Earlier in the panel, Kagan threw some shade at Google’s App Indexing API, which gives Android app developers the ability to use a standard API to make sections of their apps discoverable using their search engine. While he didn’t have anything bad to say about the technical implementation itself, he said that Google focusing on both being a platform and surfacing content are at odds because Google is increasingly moving into transactional services — so it has incentives to show Google Play over Spotify results, or Google Flights instead of Expedia. The implication: developers would be wise to work with third-party search like Quixey to avoid such conflicts.