Myriam Joire, evangelist for the wearables company Pebble, has been fired from her position. She was Tech Evangelist at the company and spoke at a number of events, including an event in Amsterdam and another in London this week.

“Wow! I just found out that I’m no longer with Pebble,” she said in a tweet. 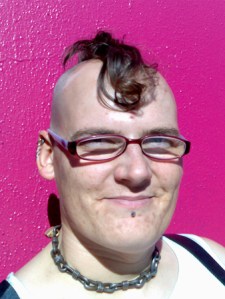 Joire, also known as TnkGrl, was at the company for a year and a month. She posted the news on her Twitter feed.

In a Medium Post, Joire described her job as representing the fledgling company to the media and the developer community. She wrote:

 My primary responsibility is to handle media relations and to be Pebble’s official spokesperson. I communicate with journalists about anything that touches the company, write major news announcements on the Pebble blog, and manage product launches including demos and review units. This also means I get to travel and speak at conferences and events all over the world (a boon for my frequent flyer status).

Joire declined to comment on internal issues at the company. I’ve contacted CEO Eric Migicovsky on the firing but have not received a reply.

Wow! I just found out that I'm no longer with @Pebble…

The company released the Pebble watch in 2013 after raising $10.3 million through Kickstarter. The company now faces threats from Samsung, Motorola, and, most notably, Apple.