5by, the video recommendation startup that became StumbleUpon’s first acquisition last fall, is relaunching its mobile apps for iOS and Android today with a slightly different focus: instead of only helping users find online videos that match their mood, 5by’s new apps are meant to encourage users to seek out videos for themselves, get a head’s up about the next viral videos before they go big, and, most importantly, chat with friends about the videos they’re watching in real-time.

This shift to become more of a social app mirrors that of 5by’s parent StumbleUpon’s recent efforts with its own mobile application. Earlier this month, the company relaunched the StumbleUpon iOS app with new features designed around starting conversations with other StumbleUpon users and friends. That is, instead of just recommending content, StumbleUpon wants to become the place where users socially chat about that content with friends.

This, too, is the impetus behind the changes with the rebuilt 5by apps for iOS and Android.

“Over the past few months, our key insight was that more of our video shares were happening via SMS,” explains 5by founder and CEO Greg Isenberg. “Since those conversations were already happening, we decided to build that capability into the app to help facilitate those dialogues.” In the new version, the idea is to make it easier for users to find and chat about the best videos without leaving the app, he says. 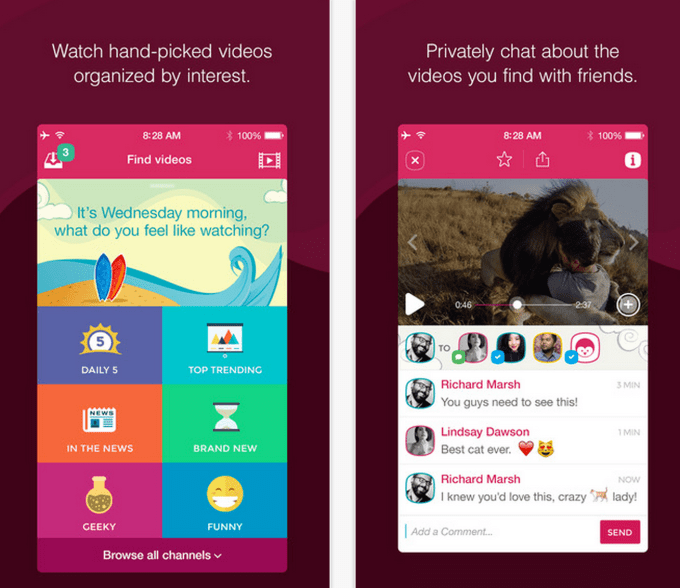 Users can either share videos privately one-to-one, or can create group chat with up to 12 friends. After sharing, you can engage in real-time, text-based conversations in 5by in a format that’s similar in style to the new StumbleUpon app.

Of course, as with any social app, the challenge is in gaining a critical mass of users. Today, you may have few (if any) friends actually on 5by to chat with, so users will still likely turn to SMS to chat about videos as need be. But as more users turn to mobile devices to network with friends and be entertained, 5by hopes to establish itself as “the ultimate entertainment inbox,” says Isenberg – a “one-stop shop for all things online video.”

Another new feature in the updated apps out today is a video search option. 5by today allows users to search across YouTube and various partner channels, including VICE, Tribeca Enterprises, DEFY Media, and as of today, Mashable. In a few more weeks, the company is planning to unveil some even larger partnerships with media companies, notes Isenberg, who can’t yet provide those names. These partners have their own channels within 5by where they can feature their best video content, including those from their YouTube libraries.

The company declined to offer user numbers or figures related to monthly growth, saying only that as a mobile-first company, 65% of 5by’s usage is now coming from iOS and Android devices. The app is driving hundreds of thousands of video plays daily, and millions of video plays per month, we’re told, and users are watching, on average, 20 videos per session.

Video recommendation is still at the core of what 5by is about, however. So today, it’s rolling out a feature called the “Daily 5,” which, as you may have guessed, is a showcase of five must-watch videos. These are the videos that will likely be trending the next day, the company says, and are surfaced using 5by’s patent-pending recommendation technology which was one of thing that interested StumbleUpon in the acquisition in the first place.

Users will also notice that the apps received a new look with the updated releases out now, where the focus is on allowing users to more easily discover, watch and share videos with friends.

5by is a free download on iOS and Android.