Aaron Patzer, the founder and former CEO of Mint is placing his next bet with the on-demand info space. He and co-founder Jean Sini (another former Minter) are launching the beta of Fountain, an app that gives you advice from a curated set of experts. The app is currently focusing on the home improvement space and in alpha testing phase with a bunch of friends and family, but Patzer tells us the beta version will be ready for a few hundred TechCrunch readers and others this Saturday.

Fountain already has its first Series A locked up with $4 million from Shasta Ventures and First Round Capital. Both Shasta and First Round invested in every round of Mint since it won the first Disrupt back in 2007. Patzer pulled in a bunch of other Mint talent to work with him on Fountain as well, including Stew Langille who just left Visual.ly as the co-founder and CEO, and Jason Yiin who worked on the original Mint iOS and Android apps as well as the original Facebook app. 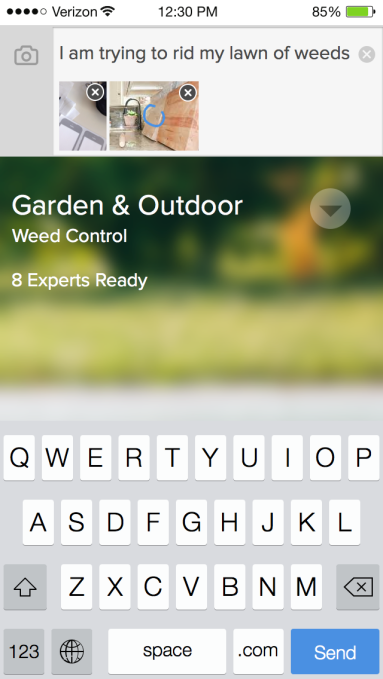 Patzer’s been quiet for a number of years, spending time on various projects and home improvement for a house and 22 acre farm right on the ocean in New Zealand. He says this actually led to the idea for Fountain. “I had all this cedar wood and one guy said I didn’t need to treat it and another guy told me I definitely did need to do that every year and he’d be happy to do it for a certain price. I didn’t know who to believe,” explained Patzer.

That’s a common problem for sure, especially with potentially expensive home improvements, mechanical issues or a number of other things we deal with in everyday life, but it seemed to me as Patzer and I discussed his new idea over coffee that this was all Googleable. “Couldn’t I just whip out my phone right now and search for the answer online?” I ask him this as he’s in the middle of showing me how to choose the right color scheme for the coffee shop we are sitting in. Patzer pulls up the app, snaps some picks and starts thumbing through a myriad of interior design experts. “What you have online is all general,” Patzer explains. “It’s not specific to your situation and it’s not right when you need it”

Gretchen, the interior design expert pops up on Patzer’s phone. We’re now in a video chat and she’s ready to help us with our color questions. “Hi Gretchen. I just took some pics of the colors in this coffee shop and sent them to you but you don’t have to do anything at the moment. I’m just demoing Fountain for a TechCrunch reporter,” Patzer tells her. “Uh, okay,” Gretchen says as she and I wave to each other via phone chat. Patzer didn’t expect her to actually pick up. “No one is really on call until Saturday when we launch beta,” he explains. He’s been busy gathering folks on the expert end before the beta launch. We can add notes and send more info to Gretchen, if needed. The whole process is quick and seems easy enough. 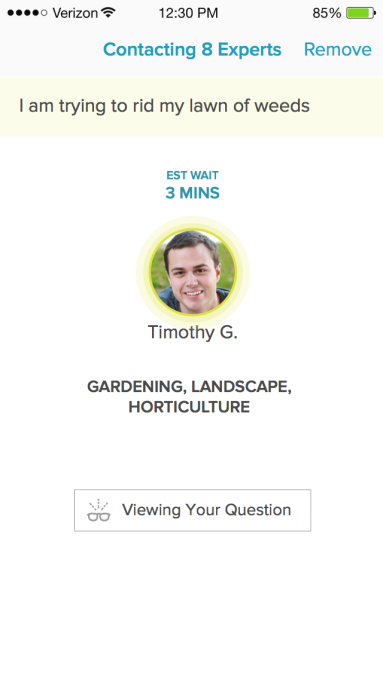 The app allows use of voice, video or texting. The app allows you to draw on the pictures you take to point out specific things you are concerned about or to show the person on the other end exactly what you are getting at. The experts are available 24/7 in theory and the whole thing should take about 5 minutes, according to what it says on the app.

You can ask about that weird hum in the fridge, how to fix a toilet, or why all your terrarium plants seem to die on you. Categories are all focused on home improvements for now, though Patzer does plan to expand to more categories as the app grows in user numbers. He pulled up the app again to demo that it could already theoretically do more. “I’m stuck on MySQL,” he voiced into the mic. Programming help is not something the app currently offers, but the app told us one expert was ready to help us out on our problem anyway.

Patzer tells me his monetization plan is pretty simple, too. Ask an expert or get a second or third opinion for just $5 a pop. Fountain is free during the beta period. That will most likely end in January, according to Patzer. 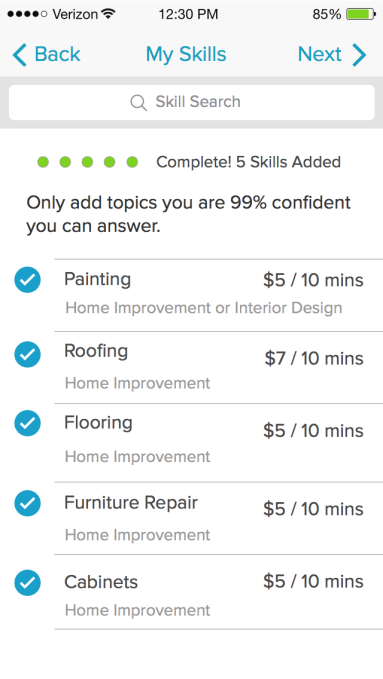 A lot of people have tried to do this same sort of thing in one form or another. There’s the completely horrible advice on Yahoo Answers, Quora or the tried and true asking of friends on Facebook. Many startups in the on-demand answers via smartphone space have tanked and a handful of what’s out there now seems to focus mostly on what ails you. Doctor On Demand and HealthTap let you have a back and forth video convo with a doctor of your choosing. Doctor On Demand is $40 per “visit”. HealthTap used to be $100 but has recently reduced it’s price to $44 and let’s you invite your own doc to the service now. First Derm is an app that lets you take a picture of skin conditions and possible STDs and get advice on what to do next. That’s also for $40 per assessment but it’s not in real-time.

Clarity hands out business advice for for a price set by each expert on the platform. You ask a question via the site and within 72 hours you get a conference call code that allows you to speak with someone. But it’s not when you want it. Nothing really exists in the home improvement space. And Patzer points out that not all of the expert advice is given right when you need it. Clarity, as we mentioned above, takes up to three days, First Derm takes about 24 hours to get back to you. 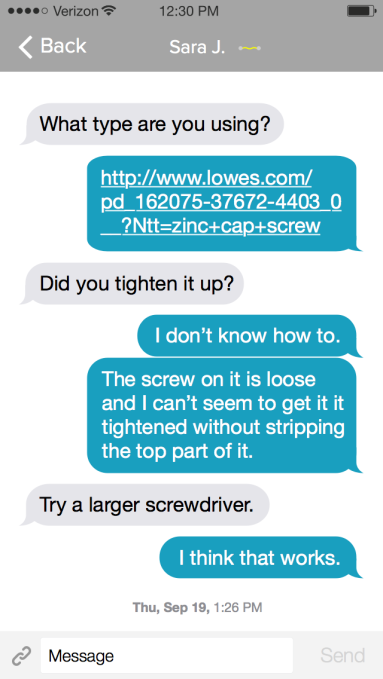 Patzer plans to roll out more than just home improvement advice but would like to just stick with that category for now. “It’s a pretty broad category that touches everyone. The right advice can save you a lot of money, too,” he points out, “Your home is one of the most expensive things you will ever put money into. I know this from first-hand experience,” he says.

The first 300 TechCrunch users can skip the wait list and get straight into the beta test this Saturday by clicking here. You can actually get in a bit earlier by going to that link, but Patzer cautions that experts probably won’t be online till the Saturday launch. He didn’t expect Gretchen to pick up when we summoned an interior design expert. She just happened to pick up while out to brunch with friends.