Ello.co, the ad-free social media network which blew up last month, has nabbed $5.5 million in venture capital funding even as it plants a legal flag in the ground that the company will never make money from selling ads or user data and that no acquirer can do so either.

The company filed in Delaware as a Public Benefit Corp., which Ello says makes it legally impossible under US law for investors to require Ello to show ads, sell data, or sell the company to any buyer who would violate those conditions.

Ello chief executive Paul Budnitz said it was a response to the “giant billboard” that the Internet has become. The commitment from Ello also extends to the use of real or anonymous identities, while at the same time requiring members of this new “community” to follow common-sense rules of conduct.

Unfortunately, as our own Sarah Buhr wrote earlier, the company may be a victim of its early success:

Sure, it’s in beta and as such people shouldn’t expect the site to be perfect, but with that much growth and an endless amount of invites, the site is pretty open for saying it’s in beta. It’s tragic that it’s growing so fast, actually. The features list actually looks pretty cool. However, most of it isn’t built or doesn’t work well.

The search feature should be Ello’s highest priority, especially with this kind of growth. Ello’s UI is pretty janky and makes this feature hard to find. The search option doesn’t work and the site just offers you a bunch of people to follow without any context on why you should follow them. You can’t find your friends, even with their Ello name.

Looking at rough Alexa traffic numbers (not the best gauge, I know, but at least it’s something) indicates that traffic has fallen off from peak Ello hype. 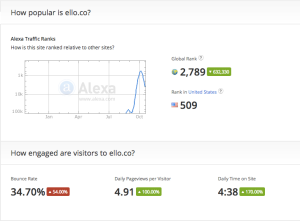 The incredible rate of new signups though (reportedly around 40,000 invite requests an hour at its peak in September) has managed to draw in the Foundry Group, Techstars Bullet Time Ventures, and FreshTracks Capital.

Given its commitment to an ad-free business model, the company says it will look to generate revenue by selling personalized features and other services at small prices through an online store “inspired by the Apple app store” according to a press release.

Ello investor Seth Levine acknowledged in his blog post that there’s a lot of skepticism around the sincerity of a group of venture investors who are committing to back a company that explicitly states it won’t sell user data or have ads on its site.

We’ll either build a business that doesn’t rely on third party advertising or the selling of user data or we won’t build a business. Our belief is that there are products and features that Ello can develop that users will be willing to pay for. While the price points may be low, as part of a much larger ecosystem with millions of users, will provide an economic model for the company which supports the business and our investment.

The investors have all signed on to a mission statement which is included below. 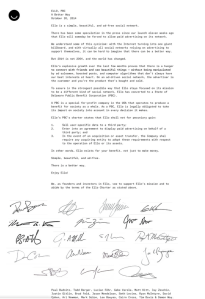